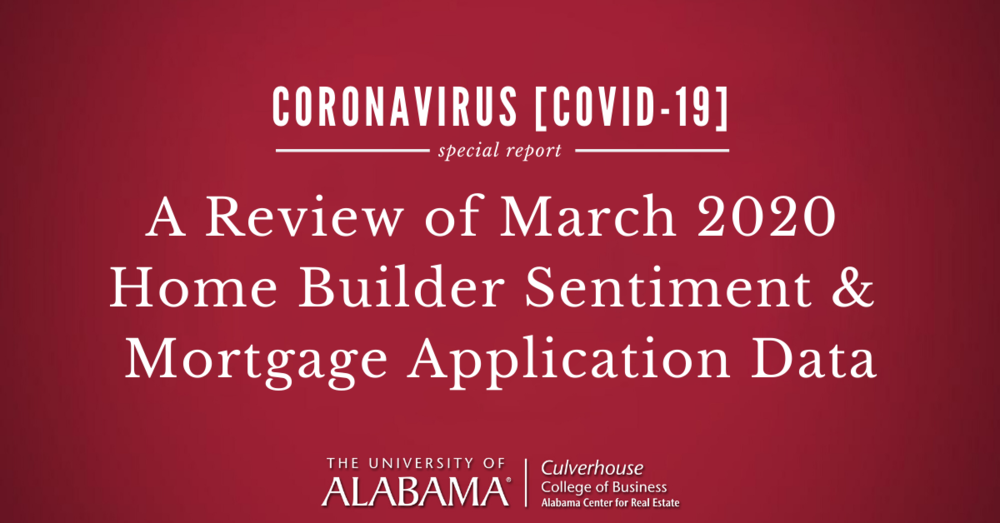 The housing-related data this week doused cold water on March’s hopes by the housing industry that record low interest rates and Realtors pivoting to virtual home tours would mitigate COVID-19 damage to the housing industry. Wednesday’s home builder sentiment and mortgage application data eliminates hopes for a robust spring housing season in 2020 and will redefine the lows in housing data charts for years to come.

Just as the NFIB (National Federation of Independent Businesses) Optimism Index and University of Michigan Consumer Sentiment Index are important bellwether indicators for the economy, so too is the National Association of Home Builders Home Builders Index (HMI). In fact, according to the NAHB (using Bureau of Economic Analysis data), housing accounts for somewhere between 15-18% of total U.S.GDP. When the NAHB HMI declines sharply, it foretells contraction ahead in housing activity.  And that is what was conveyed this week.  According to the April NAHB/Wells Fargo HMI (Housing Market Index), builder confidence in the market for newly-built single-family homes plunged 42 points from near record levels above 70 to a reading of just 30. The decline in April was the largest single monthly change in the history of the index and marks the lowest builder confidence reading since June 2012. It is also the first time that builder confidence has been in negative territory (below 50) since June 2014. 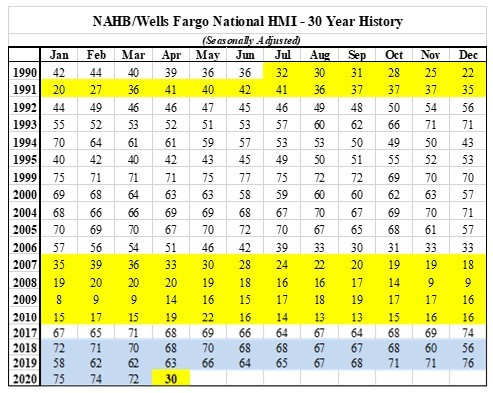 That is the statistical bad news. The context is more important. First, the decline in housing activity and builder sentiment is much different than 2009.  Both are in large part because builders are having a difficult time making payrolls with the logistics challenges in the Paycheck Protection Program (PPP). Builders cannot keep employees and contractors paid with limited home sales activity, and construction loans don’t allow for builder payrolls. While homebuilders do receive some administrative G&A reimbursement during the construction process, the allowance is not sufficient to make payrolls without sales activity. And herein comes the second piece of the context that will be amplified in the mortgage application data to follow – slow new home sales. Prospective homebuyers are anxious to go out and tour new homes, but that can be mitigated with virtual tours. These prospective homebuyers are also anxious about using savings and cash reserves for a large ticket purchase – such as a home or automobile – during the uncertainty of the COVID-19 outbreak with “Shelter in Place” orders resulting in millions of lost jobs and trillions (not an exaggeration) in lost economic activity. And the third – maybe most important – context is that this is not 2007-2010 for housing. Last decade’s housing crisis was fueled by elements not present at this time - and the outcomes will be quite different.  First, subprime mortgage lending pre-2009 fueled artificial housing demand that led to overbuilding and excess new home inventory that rippled into all segments of the housing industry – existing home sales, mortgage lending, home prices, land development, banking, etc.  Entering 2020, the housing market had an inventory shortage and disciplined mortgage lending practices and products. Second, the underpinning of liquidity for housing – banks and the Government Sponsored Enterprises (GSE) such as Fannie Mae and Freddie Mac – collapsed. The GSEs were undercapitalized and had to be put in conservatorship under the FHFA (Federal Housing Finance Authority).  In excess of 500 banks failed across the U.S. and thousands of banks and homebuilders either went out of business or consolidated. Banks wouldn’t lend and the vital GSEs were in conservatorship putting bad mortgage back to undercapitalized banks. The entire liquidity of the system locked up. It took years to stabilize the industry and work off the excess inventory.

Contrast that picture from 2009 with today. The banks are well capitalized (reflect on just this week’s large bank earnings and record revenues reported by the likes of a JPM); and the Federal Reserve has intervened upfront – versus years late in the 2007-2010 housing crisis – with all kinds of support for housing, mortgages, low interest rates, and liquidity in a bottom-up structure starting with payroll protection, SBA loans, rent and mortgage forbearance, etc., versus a trickle-down approach with facilities like TARP and TALF to the banks. This foretells that as steep and abrupt as this spring 2020 housing dislocation is going to be, it will likely rebound quickly with no excesses in inventory and so much intervention to support liquidity for housing and other sectors of the economy.  Thus, we should look forward to a robust spring 2021 housing season and take measures now to bridge business until next year as the spring 2020 housing season will not bloom.

The figures and insights for mortgage application data are as concerning as the NAHB HMI. The CNBC headline for April 15, 2020, as the Mortgage Bankers Association released the latest survey figures sums it up quite candidly: “Weekly mortgage applications rise as rates drop to 30-year low, but it’s all refinances.”

The most noteworthy revelations were:

However, just as with all the refreshed economic and earning data coming out, it’s the context that matters. The activity in mortgage applications, which rose overall by 7.3% from last week is mostly refinancing activity (75%+). In fact, refinance applications are up an eye-popping 192% from a year ago when the Federal Reserve commenced rate cutting after the four hikes in 2018. The CEO of Quicken Loans is reporting that March 2020 was a record month for mortgage revenue in their company’s history. Quicken Loans (the largest mortgage originator in the U.S.) is also guiding that April and May will break the March record. Quicken Loans’ CEO added some important context to the refinancing activity noting that it is not just driven by low rates; rather, the top reason cited by applicants for a refi is to access equity in their home now to weather the COVID-19 outbreak. Many are using their home equity to fund loss of income and/or their small businesses who are not yet able to access PPP loans due to the logistics and processing delays. It is not 2009 when the GSEs were shut down and placed in conservatorships, nor when banks rescinded Home Equity Lines of Credit (HELOCs) and dried up liquidity. The silver lining in this mortgage application data is that existing homeowners are able to access liquidity during these “Shelter In Place” orders to bridge to the other side.

In short, it truly is not 2009 for housing. Housing was healthy going into 2020 with inventory shortages and strong household growth as millennials became employed and moved out from mom and dad to rent and buy housing.  Liquidity is available, unlike 2007-2010 and the intervention is a bottom-up approach making sure workers can attain relief either through expanded and extended unemployment insurance and rent/mortgage forbearance. The GSEs are open for lending. The banks are not rescinding HELOC lines of credit on homeowners. Inventory levels are still at historic imbalances in the shortage category.

The restart of the economy will be gradual and more extended than hoped for extending well into 2H2020.  Home buyer and home builder confidence has taken a hit that will not recover until the economy is standing upright again and consumer balance sheets repaired.  The robust housing activity of the past 3 years will not return, at earliest, until spring 2021.