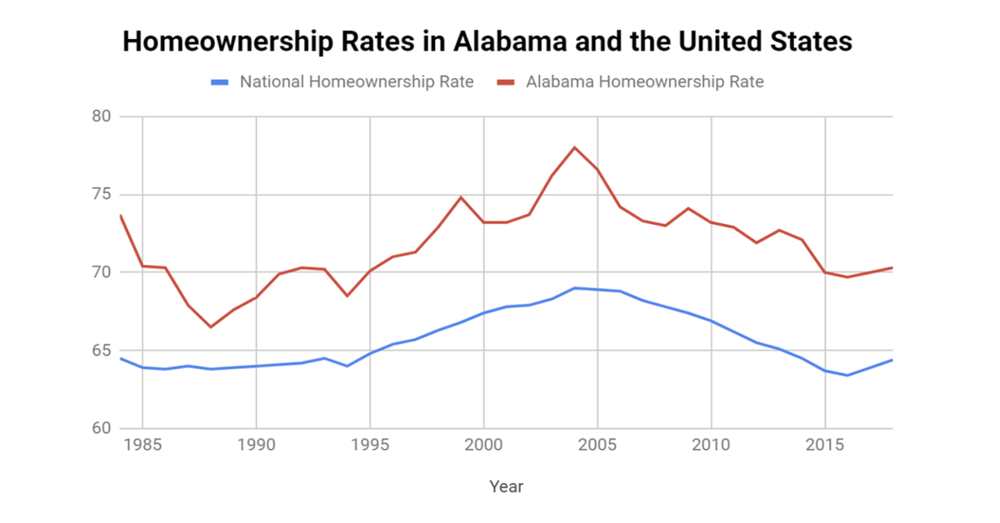 Alabama Homeownership Rates Down Slightly in the Third Quarter

While homeownership rates nationwide were on the rise during the third quarter of 2019, they decreased slightly in Alabama during the same period. However, Alabama continues to have higher rates of homeownership than the national average (69.1% vs. 64.8% during Q3 2019).

Alabama’s homeownership rate declined 2 percentage points quarter-over-quarter from 71.1% in the second quarter of 2019 to the current rate of 69.1%. The year-over-year decline was significantly less as homeownership rates fell 0.4 percentage points from 69.5% in the third quarter of 2018. It was surprising to see Alabama’s rate decline during a time when mortgage rates are also falling, but residential markets in the state continue to be impacted by a relatively small amount of properties listed to sell. The total number of homes on the market dropped 9.7% year-over-year in September, and has contributed to rising home prices in recent years. Additionally, residential listings are especially tight at the entry-level price point, which can potentially price many would-be homeowners out of the market.

So how does homeownership in Alabama compare to other states? Let’s begin by comparing Alabama to neighboring states: Alabama (69.1%) is lower than Mississippi (73.7%) and Tennessee (69.3 percent), but higher than Florida (65.5 percent) and Georgia (65.4 percent).

Here are the highest homeownership rates in the United States during Q3 2019: