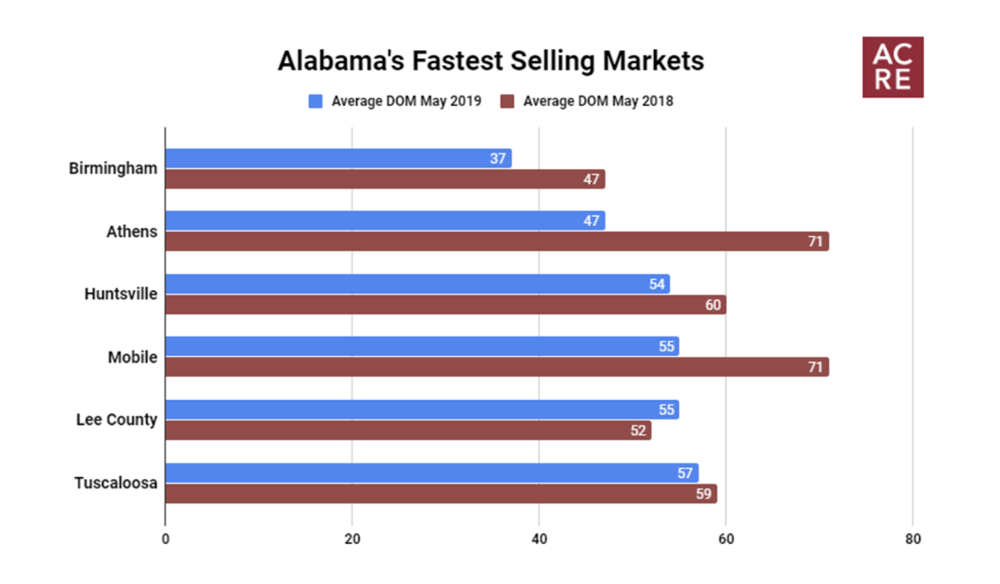 The Alabama Center for Real Estate created the following rankings based on average days on market (DOM) for closed transactions during May.

Birmingham- With a DOM average of 37 days, Birmingham was Alabama’s fastest selling market during May. Residential markets in the Birmingham area now have 30 consecutive months of y/y improvement in average DOM, an impressive streak that started in December 2016. Mirroring statewide trends but to a lesser degree, inventory was short during May as listings dropped 6.1% from one year ago. Inventory shortages, however, are not as severe as in the north Alabama region where 20-30% inventory declines are the new normal. Total residential sales in the area dropped 2.9% y/y in May and they are now down slightly (-0.2%) year to date (YTD). Home price appreciation continues to trend upwards as the median sales price in the Birmingham area during May increased 6.8% y/y from $219,950 to $235,000, and is up 6.7% YTD. With 3.3 months of supply, Birmingham is a strong seller’s market, a factor contributing to rising home prices. Dollar volume is on the rise as it increased 5.1% in May from $444.5 million one year ago to $467.1 million currently.

Athens- Driven in part by a strong new construction market, Athens was Alabama’s second fastest selling market in May with a DOM average of 48 days. Properties selling in May closed an impressive 24 days faster than one year ago, while the area’s year-to-date DOM average declined from 75 in 2018 to 55 in 2019. Average DOM in the Athens area has improved y/y for 19 consecutive months, a streak that began in November 2017. Mirroring trends seen in the Huntsville market, inventory declined 20.6% y/y, extending the streak of y/y inventory declines to 46 months. Demand for housing in the area remained strong as May sales increased 9.3% from one year ago. With tight inventory and growing demand for housing in the area, it was not surprising to see the area’s median sales price grow 17% y/y, more than four times the statewide average of 4.3%. Dollar volume was up an impressive 22.1% from $39.1 million one year ago to $47.7 million during May, extending the streak of y/y dollar volume gains to 41 months, a streak that began in January 2016.

Huntsville- Residential properties selling in May averaged 54 days on the market, an improvement of 16 days from one year ago. The area’s YTD DOM average improved from 68 in 2018 to 52 in 2019, making it the second fastest selling market in the state YTD behind Birmingham. With May’s improvement, the Huntsville area now has 33 consecutive months of y/y improvements in average DOM, a streak that began in September 2016. Mirroring statewide trends but to a greater degree, residential listings in the Huntsville metro area during May were down 26.1% from one year ago. Demand for housing, however, remained strong as sales improved 2% from one year ago, building on the record number of sales in 2018. With tight inventory and continued sales activity, it was not surprising to see home price appreciation in the area continue to trend upwards. Huntsville’s median sales price increased 12.1% y/y during May, almost three times the statewide average of 4.3%. Dollar volume also increased an impressive 16.4% y/y from $168.8 million in May 2018 to $196.4 million in May 2019.

Mobile- Residential properties selling in May averaged 55 days on the market, an improvement of 16 days from one year ago. Year-to-date, properties in the Mobile area are selling 19 days, or 22.5%, faster than one year ago. Inventory is also short in the area as listings declined 3.5% y/y during May, marking 67 consecutive months of y/y inventory declines going back to November 2013, the longest streak of y/y inventory declines in the state. While total residential sales increased slightly in May (0.4%), median sales price increased 3.9% y/y, just aread of the statewide average of 4.3%. Dollar volume increased 3.9% y/y from $82.9 million in May 2018 to $86.2 million in May 2019.

Lee County- Residential properties selling in May averaged 55 days on the market, tying Mobile for Alabama’s fourth fastest selling market. The DOM average increased 3 days from one year ago, and properties in Lee County are selling 12 days, or 18.1%, slower than one year ago. Lee County, however, differs from most of the state’s residential markets because inventory (listings) in the area is rising. May listings were up 23.5% from one year ago, while statewide listings declined 11.6% during the same period. Total sales were down 10.9% y/y, and the median sales price declined 2.3% during the same period. Dollar volume dropped 13.7% y/y from $70.6 million one year ago to $61 million currently.

Tuscaloosa- Alabama’s fifth fastest selling market averaged 57 days on the market during May, an improvement of 2 days from one year ago. Year to date, however, properties in the area are selling nine days faster than in May 2018. Similar to Lee County, the Tuscaloosa area went against statewide trends by posting a slight (2.1%) inventory gain in May. It was one of only 3 of Alabama’s 14 metro areas to post a y/y inventory gain: The other was Baldwin County with a gain of 1.2%. During the same period sales slipped 4.3%, however sales are up 1.1% YTD. The area’s median sales price grew 6.6% from $177,000 to $188,600 in May, and the YTD median sales price is up 5.4% from last year. Dollar volume increased 4% from $65.1 million one year ago to $67.7 million currently. 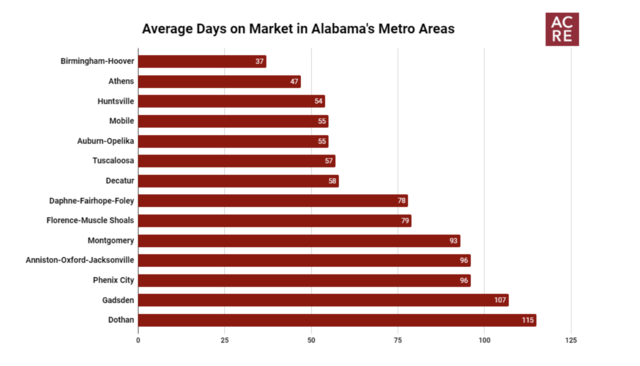