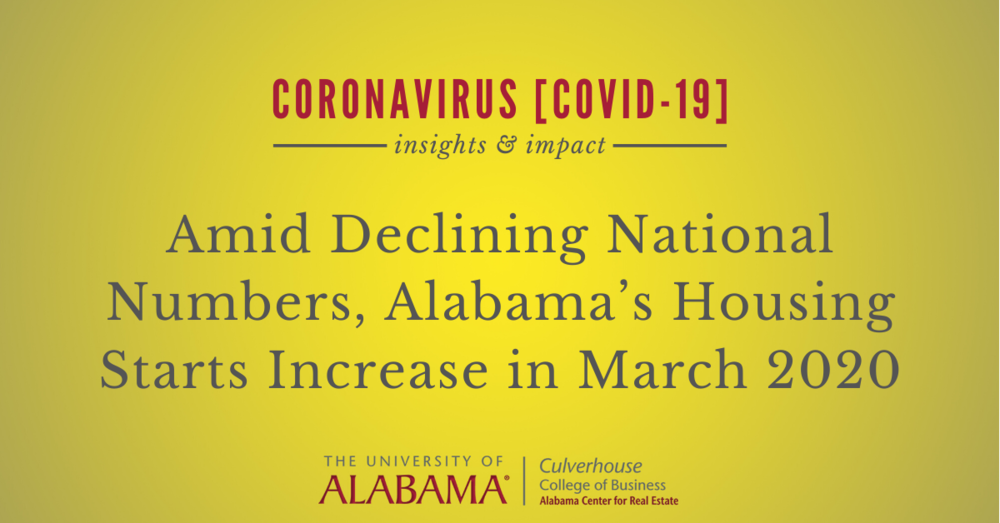 Housing starts in the USA (seasonally adjusted annual rate, SAAR) made headlines for significant declines, falling 22.3% from February to March. Both single family and multifamily starts were down, with single family declining 17.5% M/M and the more volatile multifamily falling 31.7 M/M%. Starts were down in all regions, but were down the most in the Northeast, which also has the nation’s highest concentration of COVID-19 cases.

Housing starts are based on building permit data collected monthly by the Census Bureau. Privately‐owned housing units authorized by building permits in March, both single and multifamily) declined 6.8% from February, but were 5% above the March 2019 rate of 1,288,000 (SAAR).

The “good news,” however, is that both housing starts and housing permits increased year-over-year in both the seasonally adjusted annual rate and the non-seasonally adjusted raw data. So even with the significant month-over-month decline (in SAAR data), they are still in positive territory year-over-year. The effect of the coronavirus pandemic on housing starts and permits is significant, but the sector has not been hit nearly as hard as others (manufacturing and hospitality as two of many examples).

Another piece of relatively good news were the year-over-year gains in residential construction employment. While total permits and starts posted large declines (SAAR) from February, jobs in the industry increased both month-over-month (0.2%) and year-over-year (3.3%). This mirrors, to some degree, the growth seen in starts and permit data from one year ago, which is encouraging, all things considered.

Going against national trends, single family building permits in Alabama increased 1.2% month-over-month and 21.2% year-over-year (SAAR). One factor in the difference was relatively good weather in the state during March, while the state’s climate easily allows for year-round construction.

ACRE’s March 2020 New Construction report is similar to other ACRE reports in that it uses raw monthly data, not a seasonally adjusted annual rate. Single family building permits in the state, as reported by the Census Bureau, increased 24.3% year-over-year from 1,198 to 1,489. Nine of the state’s 12 metro areas reported gains from one year ago (Anniston, Decatur, and Gadsden posted declines) in March. Year-to-date, the largest gains have been seen in Tuscaloosa (90.6%), Anniston (40%), Montgomery (39.2%), Auburn-Opelika (31.1%), Huntsville (21.3%) and Birmingham-Hoover (28.7%).

Huntsville continues to lead the state in total new construction activity with 1,013 SF permits year-to-date through March. With roughly double the population, Birmingham-Hoover is at 833 new permits for the year while Daphne-Fairhope-Foley is third with 534. Given it’s relatively small population, it’s surprising to see the area well ahead of much more populous metros such as Mobile and Montgomery (175, 245 respectively). However, it’s not so surprising because Baldwin County is the fastest growing county in the state, has a large secondary/vacation home market, while also anchoring Alabama’s tourism industry.

The coronavirus pandemic is expected to end years of record growth in tourism in the state. An estimated 28 million visitors spent approximately $17 billion in Alabama in 2019, but 2020 revenues are expected to be as low as $14 billion. This is not the first, nor the last, disruption for Alabama’s gulf coast. With a long history of hurricanes (bad years include Ivan in 2004 and Katrina in 2005) and the more recent BP oil spill, the area is quite resilient. Alabama’s gulf coast has overcome adversity many times before, and will hopefully do so again, and again.