Economic Acronyms: The WIN themes of the past few weeks compelled me to commence a running list of statements I have heard thus far in 2019 that, frankly, I could not have imagined hearing 1 quarter, 1 year, or even 1 long 30-year career ago.  Making the list in the past 30 days include:

The thread running through the aforementioned items on the list of Things I Never Imagined Hearing are the WIN themes of the past few weeks:

What I have concluded is in agreement with a psychologist’s analysis of economists during a Blomberg feature Monday August 19th. The Bloomberg guest concluded that economists have Physics-Envy.  In other words, economics is not an exact science with certain laws and proofs, like physics, with absolute concepts and proofs such as Euler’s Law (The linear momentum of a body, p, is equal to the product of the mass of the body m and the velocity of its center of mass (v)

Don’t ask me to explain it.  I am 1-part appraiser and 1-part economist. I only explain Cap Rates and IRV (Income/Rate=Value).

Economists are understandably frustrated that economics is more behavioral science and psychology than math. Proof in point is the 2017  Pulitzer Prize for Economics went to a “Behavioral Economist” for his work integrating economics and psychology. Economists secretly desire that economics was more like physics. Take for example the definition of a recession.  The popularized theory is two consecutive quarters of economic contraction – contraction of what; and does contraction mean slowing or actually turning negative?  A group known as NBER (National Bureau of Economic Research) defines a recession more broadly - and lacking the structure and math of a physics proof.  NBER officially defines recessions in the United States as follows:

“A recession is a macroeconomic term that refers to a significant decline in general economic activity in a designated region. It is typically recognized after two consecutive quarters of economic decline, as reflected by GDP in conjunction with monthly indicators like employment.

That definition would cause a physicist to have a stroke and be banned from science. Regardless, NBER dates recessions by this broad definition.  In other words, recessions are not determined by some exact or mathematical formula or proof; rather, they are determined by a committee of economic experts on a basis that does not resemble anything close to a proven formula as in the field of physics.  The key takeaway is to take a deep breath regarding all the prognostications of recession due to the inverted Yield Curve and know economics is not physics.

And herein lies the basis for all the economic acronyms and metrics, such as LEI, U2 and U6 Unemployment, ISM, PMI, CPPI, HPA, NFIB-SBOI, NAHB-HMI, etc.  While most economists have correctly forecast 12 of the last seven recessions, there is one economist that gave us something as close to a physics proof for forecasting recessions and had the humility and foresight to explain it in a manner that Grandma could understand. Who and what was it?

The answer is a finance professor at Duke University (Campbell Harvey) who holds the distinction as the only economist to correctly forecast the last 7 recessions.  This past week, Forbes featured Professor Harvey’s work and 1986 dissertation that first showed the yield curve’s ability to predict recessions. At the time in 1986, his model had correctly predicted the previous four recessions. It has subsequently predicted the three recessions since its publication.  That track record is why the Yield-Curve is so much in focus today – it is more like physics than economics, and has a track record like a mathematical proof. I highly recommend reading this Forbes feature not only to understand an Inverted Yield Curve, but to study how a very bright academic also found a way to present this complex concept in a manner that even Grandma could understand.  Refer to my August 18 LinkedIn post.

The Economic and Real Estate Industry News of the Week:

Housing and Multifamily:
There is a lot of news to report here.  First, after the posting of last week’s WIN, HUD announced the new FHA condo rules to facilitate more affordable housing.  NAR covered the news and provided the following summary of the new condo rules:

Specifically, the new rules will:

Second, housing stocks have continued to perform well engaged in “Goldilocks homebuilding” (building just the right number of units that yield a decent profit margin for the risk undertaken). Yes, more inventory would reduce HPA increases in many markets and add affordable inventory, but there is no economic incentive to pursue that pre-2007 business model again.  Check out the following public builder earnings here in Q2 2019.

And finally, yours truly was afforded an opportunity this week by CCIM Institute and Globe Street to address Affordable Housing (AH).  The piece published August 20th titled "Viewing Affordable Housing Through a Multidimensional Lens" looks at ways we can achieve more affordable housing though Adaptive Reuse, re-examining development of manufactured housing communities,  and looking at AH from a 3-D perspective – or contrary to the 1-Dimensional LIHTC and stick-built MF approach controlled by bankers and developers.

“We need to think 3D (workforce, senior citizens and millennials/college students) and outside the box of a stick-built apartment to adaptive reuse projects such as new mobile home communities or even tiny-house subdivisions.”

It’s not every WIN that a property management and IREM concentric item surfaces, but this week a feature by a brokerage company (Morris Commercial Real Estate servicing South Florida) brought into focus the challenge that Dockless Transportation and “Scooter Litter” pose for property managers – especially at urban office and hotel properties.

The complications of dockless transportation are many. While users rejoice at having a scooter or bike around every corner, it can be a little more complicated for cities and towns. Initially, entrepreneurs dropped these bikes where they pleased around a city and let customers come to them. But this has led to a number of concerns:

You can also refer to my LinkedIn post this week on the subject.  It’s time to do something about “Scooter Litter!”

Retail:  It seems like every week retail is in focus for something good, bad or ugly – like strong Retail Sales or Earnings form the likes of a WalMart, or another announced round of retailer bankruptcies like Barneys and A’gaci of past two weeks or more store closings.  The news this past week was all retail earnings.  It’s hard to have a recession on the horizon when you see earnings like WalMart’s from this week.  The following headline from  MarketWatch last Friday is the antidote to the Inverted Yield Curve fever.  Inverted Yield Curve equals recession – not so fast! 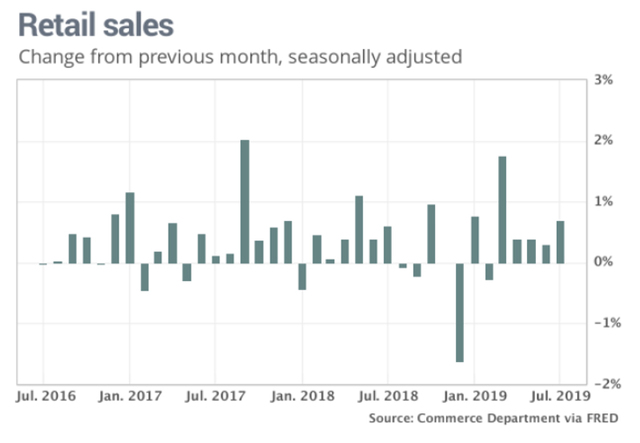 The key retail news that I want to call your attention to, though, is another great research piece by Trepp. They have a new analysis that looks at retail CRE debt exposure in the CMBS debt world by retailer.  The chart below is what caught my eye. It identifies the retailers most at risk to overleverage in the universe of CMBS debt.  Pay attention and read this new Trepp analysis if retail is your thing - and you have Retailpocalypse anxiety.  For those of you keeping count of store closings, this excerpt from this new Trepp analysis will help you at American Banker Credit trivia night over Labor Day weekend.  Great research and analysis by Trepp! Are you tax assessors paying attention?  More Dark Stores coming back to you for tax appeal.  Local governments you need a plan to deal with the lost property tax revenue.  Just note what is happening in Johnson County, Kansas with retail property tax appeals.

Coresight Research estimates that approximately 7,500 US store closings have already been announced through July of 2019; a figure that already eclipses the total closure count of 5,864 for full year 2018 by roughly 20%. The firm details that announced store closures could rise to 12,000 by the end of this year which would completely shatter 2017’s record-breaking count of 8,139 liquidated storefronts. 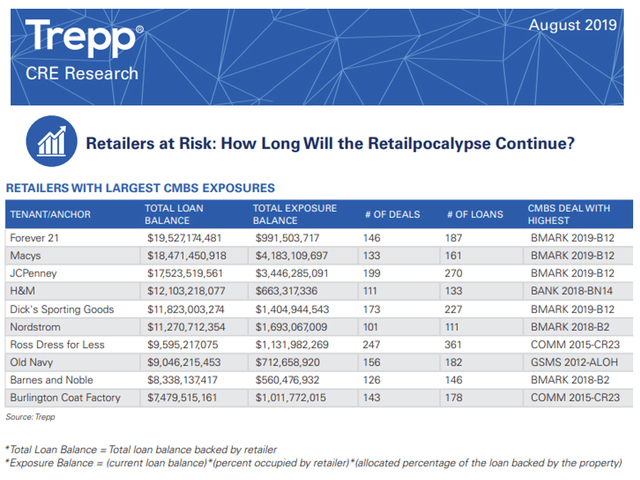 Industrial:  It is still humming along like a well-oiled machine. A new record for largest containership to call on a port was achieved with nearly 24,000 containers.  The World's Largest Container Vessel has arrived in Europe after its maiden voyage from China. MSC Gülsün, owned by Mediterranean Shipping Company, is longer than 36 London buses and can carry up to 23,756 containers — enough to hold some 223 million bananas or 8.35 million microwave ovens. It called at Bremerhaven in Germany yesterday. Our U.S. ports need to get ready for more than 12,000 TEU vessels and dredge deeper than 50-feet.  The monster ships are coming! 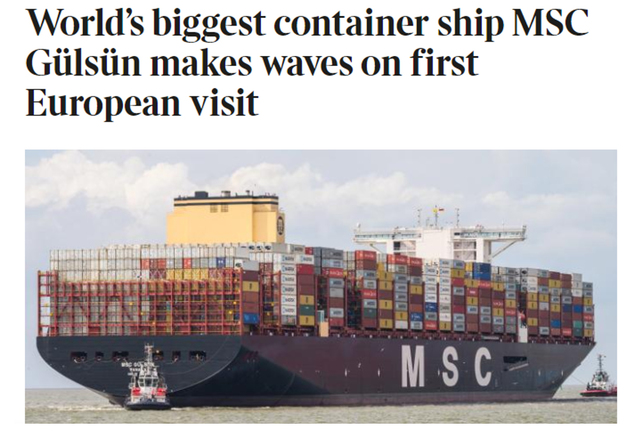 This week we get more “Fed-Speak-eth Too-Much” with the annual gathering of Fed policy makers in Jackson Hole, Wy. hosted by the Kansas City Fed. Chairman Powell speaks Friday. Let’s hope he has a better PR person working with him than former Fed Chair Greenspan with his “Zero is Meaningless” comment this past week.  We are headed for an extended period of volatility.  Europe Central Bankers will likely engage in more QE next week and cut their rates further forcing the Fed to cut rates at their next meeting in September and final meeting in December.  What a reversal from four hikes in 2018.  It’s a race to see who can have the worst negative yielding bond debt.  Just put the following in perspective.  At the end of June,  we had $13 trillion in negative yielding global bond debt.  By early August that had figure had risen to $15 trillion.  Today it stands at $17 trillion.

I am serious when I ask:  Is this what Rome, China in 1040 AD and Germany in 1923 looked like when their FIAT currencies collapsed?  Maybe the Central Bankers of the world need to lease the golden arches from McDonalds to so they can keep us updated on the “Trillions of Negative Yielding Bonds Sold.”

Have a good week and try to get in one last restful trip to the beach. lake or mountains over Labor Day weekend.  We are going to need our stamina for the sprint to year-end 2019.  For those college football fans, it all starts up here again this weekend.  Clemson, Alabama, Auburn, Georgia, and Ohio State programs are all ready to go!

You’ve Got Advance Warning Of The Imminent Recession. Now What Are You Going To Do With It?

Proposition 13 treats all California property taxes the same. Voters could change that in 2020

Could Eminent Domain Be The Zombie Mall Slayer?

FHA Lowering Requirements To Get More People To Buy A Condo

Homebuilding Should Be Booming Right Now. Why Isn’t it?

A Guide to Choosing the Right Location for an Industrial Site