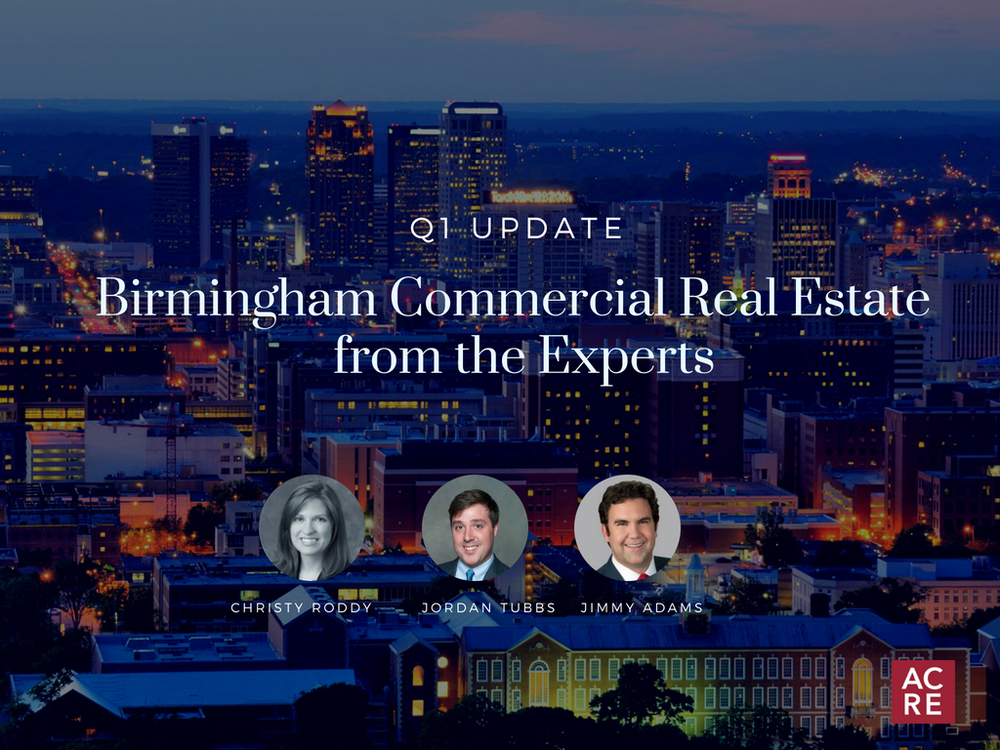 Birmingham CRE from the Experts

overall health of the market. This negative absorption was primarily due to two large corporate

relocations. Regions Bank completed its move out of 160,000 sf at Regions Harbert Plaza in

headquarters. At the same time, Southern Company began its phased relocation out of 450,000 sf at Inverness Center 40, 42 and 44 in the U.S. Highway 280/southern submarket.

The company will occupy 677,478 sf in its new headquarters at Colonnade North and Colonnade South office buildings, increasing its total occupancy by 227,478 sf and putting these Colonnade properties back into use after several years of being vacant. In more positive news, FIS will backfill a portion of Southern Company’s space at Inverness Center 44 and move into 112,500 sf in fourth quarter 2018.

rents for the Birmingham market increased slightly to $19.35 per square foot (psf), up from

$19.31 psf this same time last year. Leasing activity continued at a steady pace with 194,047 sf of transactions signed in first quarter, with Class A transactions accounting for 93,864 sf of the total.

As the year progresses, and Alabama’s economic climate continues to strengthen, commercial leasing activity is expected to remain healthy throughout the year as businesses continue to lease new space. Additionally, there are several mixed-use, hotel and multi-family development projects currently underway in Birmingham’s CBD, increasing excitement and momentum in 2018.

The industrial sector in Birmingham continued to tighten in the first quarter of 2018, current occupancy rates for Bulk Distribution space are at historic highs across all submarkets with little relief in the pipeline.  The Oxmoor Logistics Center, the first speculative build in Birmingham since 2007, is set to be delivered in the third quarter of 2018 which will bring a much needed 112,500 sf of class A distribution space to the market with 34,500 sf of that project being preleased.  Asking rental rates for all classes of bulk distribution space are increasing across the Metro area as Landlords take advantage of the current market conditions.

Freestanding industrial buildings, the favored product category for medium to large sized local companies, are also becoming scarce.  Multiple offer scenarios for this product category are becoming more common as growing businesses compete for the rare listing that comes to market.  Several of the first quarter sales transactions had competing offers, previously a rarity in the Birmingham marketplace.

Build to suit development has provided an answer for several Birmingham businesses including Canton Properties, a regional wholesale distribution company.  After an exhaustive search of the local inventory, Canton decided in early 2018 to break ground on a new 80,000-square-foot facility. It is expected that the industrial development pipeline will remain active for the foreseeable future and certainly the remainder of 2018.

41 North Industrial Parkway, a 270,600-square-foot distribution center in Calera sold to an investor.

Coming off a near-record year for overall economic development, Birmingham’s multifamily forecast looks healthy. We expect the 7,100 net jobs added year-over-year to foster demand for apartments and complete the absorption of newly built and newly renovated projects along the 280 Corridor as well as provide a tenant base for new construction downtown. Steady job creation and an increasing demographic of high income wage earners are drawing residents closer to Birmingham’s urban core. One notable trend is the adaptive re-use of vacant commercial space downtown.  The rental and for-sale housing markets are tight downtown.

According to the Green Street commercial property price index, manufactured home parks and industrial properties had the strongest price growth over the last 12 months.

Hoping to incentivize investment in low-income areas through federal tax deferrals, Opportunity Zones were created by the Tax Cuts and Jobs Act of 2017.