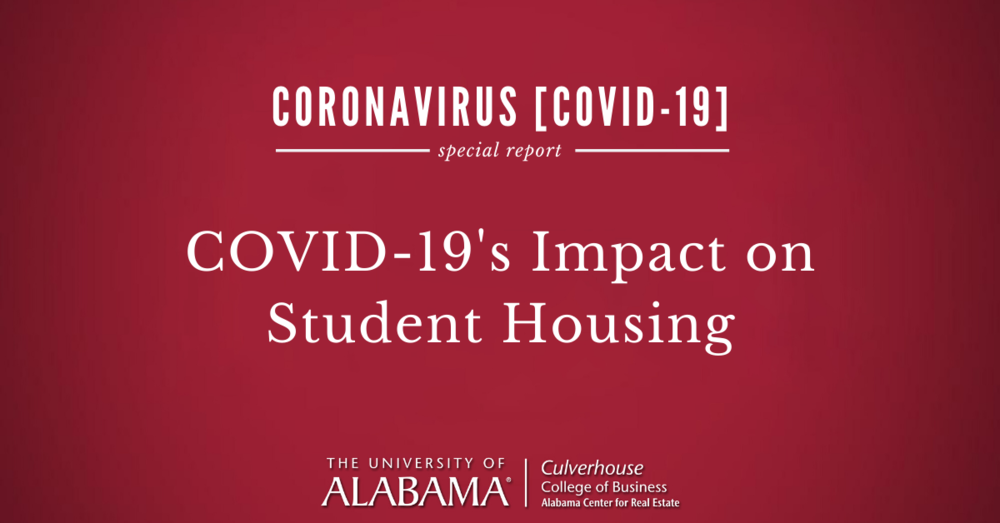 Editor's Note: The content from the following article is based on a recent Real Estate Matters podcast with Sean Baird, director of national student housing at Colliers International and Ryan Lang, vice chairman at Newmark Knight Frank and head of its student housing division.

The COVID-19 pandemic has affected all commercial property types, student housing included. Mr. Lang began by introducing the idea that student housing is seen as somewhat recession proof when compared to other asset classes, citing performance from the financial crisis of 2008. One factor that has many people in the sector cautiously optimistic is that April pre-leases were closely aligned with levels seen one year ago. Many students at campuses around the nation have already returned home from school, but collections are running around 90% across the board, significantly higher than multifamily or retail. Additionally, the weakening of the job market during the first month of COVID-19 should encourage more students to return to school in the Fall. College enrollment grew by about 6% nationwide during the last economic downturn of 2008-2010. However, a good bit is left to chance as there is no guarantee quarantine orders will be lifted in time for the “planned” return to campus in August.

With regards to transactions in general, Mr. Baird noted that extensions are being given due to uncertainty, with investors wanting a guarantee of “heads in beds” in August. Transaction activity is also seasonal, with most occurring in the third and fourth quarters, and Spring being the relative slow season. Another reason for cautious optimism is the relatively small amount of new product on the market, and for the most part it is business as usual with the big question and concern surrounding the resumption of on-campus classes in the Fall.

On the capital markets side, transactions are getting tougher to complete in the current environment. The debt side is somewhat frozen up at the moment. Fannie and Freddie historically do 80% or more of the debt financing in the student housing market, and under current conditions they have become a bit more conservative, which makes transactions harder to complete. But there is also a considerable amount of private capital in the market as institutional capital takes somewhat of a back seat. Also, transaction volume is likely to rebound in the third and fourth quarters, especially if state and local restrictions are removed by August.

There was some concern at the beginning of the pandemic that student housing could be the first domino to fall, given the swift closure of colleges across the nation. Mr. Baird again emphasized that he was pleasantly surprised by the April collections data, while multifamily collections were in the high 60s / low 70s during the same period. Retail, which was struggling to a large degree coming into the pandemic, has reported declines of 20-30% in collections, especially as non-essential businesses are shuddered. Student housing on the other hand, has been quite resilient in the downturns of previous years. The COVID risk is that the eggs are essentially in one basket, that of on-campus classes resuming in the fall.

Mr. Baird and Mr. Lang closed the podcast by saying there is good reason to be cautiously optimistic about the future of student housing. Many investors, for example, have bought into student housing in recent years for this exact reason, to diversify into a sector that has potential to perform well in the event of a downturn. Also, the universities are highly incentivized to “return to normal” in August, and they will be smart and safe about it. Contingency plans are in place to delay the return to campus with online classes for a few weeks or even a month if necessary. Fall semester is highly likely to happen, but will not be announced by school officials until a later date when there is more clarity.

Listen to the entire episode here.