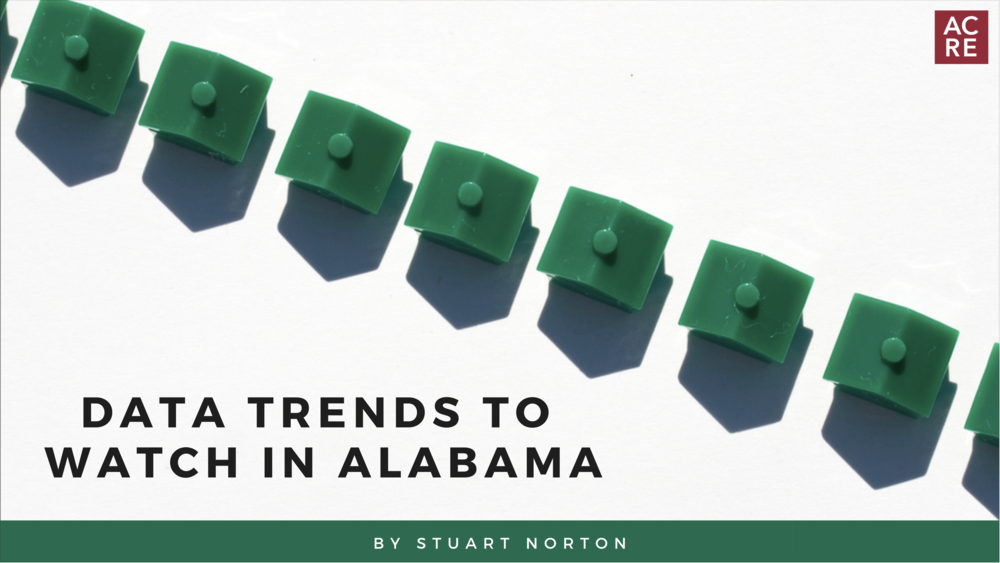 This article will examine the relationship between statewide and national trends to determine the extent to which Alabama markets lag behind national markets. Nationwide trends, therefore, can be analyzed to gain insight regarding what lies ahead for real estate markets in Alabama.

When talking to professionals within various aspects of the real estate industry, it is common to hear that Alabama markets lag approximately 12-18 months behind national markets. As a way to test this observation, the Alabama Center for Real Estate compared statewide data to national data during the last economic downturn. State and national indicators include median sales price, total sales, inventory, and average days on market.

The S&P/Case-Shiller U.S. National Home Price Index was used to quantify national price trends. The Case-Shiller is considered by many to be the gold standard of national home price indices. It is based on an index value of 100 in January 2000. A quick look at a graph of the seasonally unadjusted data going back to 1987 reveals some surprising insights. For example, not all recessions have a negative impact on residential real estate values. The Case-Shiller index increased 4.9 percent during the dot com bubble of 2001. In more recent years, the index hit a pre-recession peak in July of 2006 at 184.62. The surprise, however, lies in the fact that the index continued to fall well after the recession ended in June of 2009 when the index score was 149.81. The Case-Shiller hit a post-recession low in February of 2012 when it stood at 133.99. In other words, national home prices bottomed out two years and 8 months after the Great Recession technically ended.

To quantify the extent to which Alabama markets lag behind national price trends, let’s take a closer look at median price data from ACRE’s database. Residential pricing in Alabama hit a post-recession low in January 2013 when the statewide median sales price was $106,300. Real estate is very seasonal, so it is not surprising that the trough hit in January, historically a slow month for residential real estate. With the Case-Shiller Index hitting a trough in February 2012 and statewide median sales price bottoming out in January 2013, we can conclude that Alabama markets were 11 months behind national markets with regards to pricing in the aftermath of the last major economic downturn.

Does the same hold true for total residential sales? Did sales volume in Alabama hit a trough roughly one year after nationwide markets? The short answer is no. The National Association of REALTORS existing home sales report is a great data source for nationwide markets. But because the existing home sales report only provides monthly data going back one calendar year, ACRE used sales data from Zillow Research for this analysis. A comparison of Zillow and NAR sales data revealed an average difference of 2.36 percent from July 2017 to July 2018, making Zillow’s national sales data quite reliable. With regards to residential sales volume, both nationwide and Alabama markets reached a trough in January of 2009. This is surprising because statewide sales volume did not lag behind national trends in the same way that pricing did. Another key difference was that sales volume was immediately impacted by the economic downturn as both statewide and national markets bottomed out during the recession, while price continued to trend downwards for more than two years after the end of the recession. A key takeaway for real estate professionals, in the event of another economic downturn, is to expect a drop in sales volume before a drop in pricing.

Alabama’s residential markets were ahead of nationwide markets in one area: inventory. The amount of unsold inventory in the state peaked in June of 2010 when there approximately 42,400 residential properties listed for sale. National inventory, on the other hand, peaked in July of 2011 when there were approximately 2.45 million listings nationwide. When looking at inventory, Alabama markets were 13 months ahead of national trends.

The last indicator that the Alabama Center for Real Estate examined was average days on market. In the wake of the Great Recession, properties nationwide sold at their slowest pace in January of 2012 when the average property spent 119 days on market before selling. For Alabama markets, this indicator peaked in March 2013 when the average property spent 171 days on market. When focusing on average DOM, Alabama markets were 14 months behind national markets, which falls within the 12 to 18 month range cited by many real estate professionals across the state.

So how far behind national trends do Alabama markets lag? The answer depends on which indicator you examine. In Alabama, median sales price hit a post-recession trough 11 months after nationwide markets. With regards to average days on market, Alabama markets fit the conventional wisdom by peaking 14 months after nationwide markets. There was no lag, however, in total sales volume in Alabama and nationwide hit a post-recession low in the same month, January 2009. And finally, inventory was the exception as unsold listings in Alabama peaked 13 months before national markets.