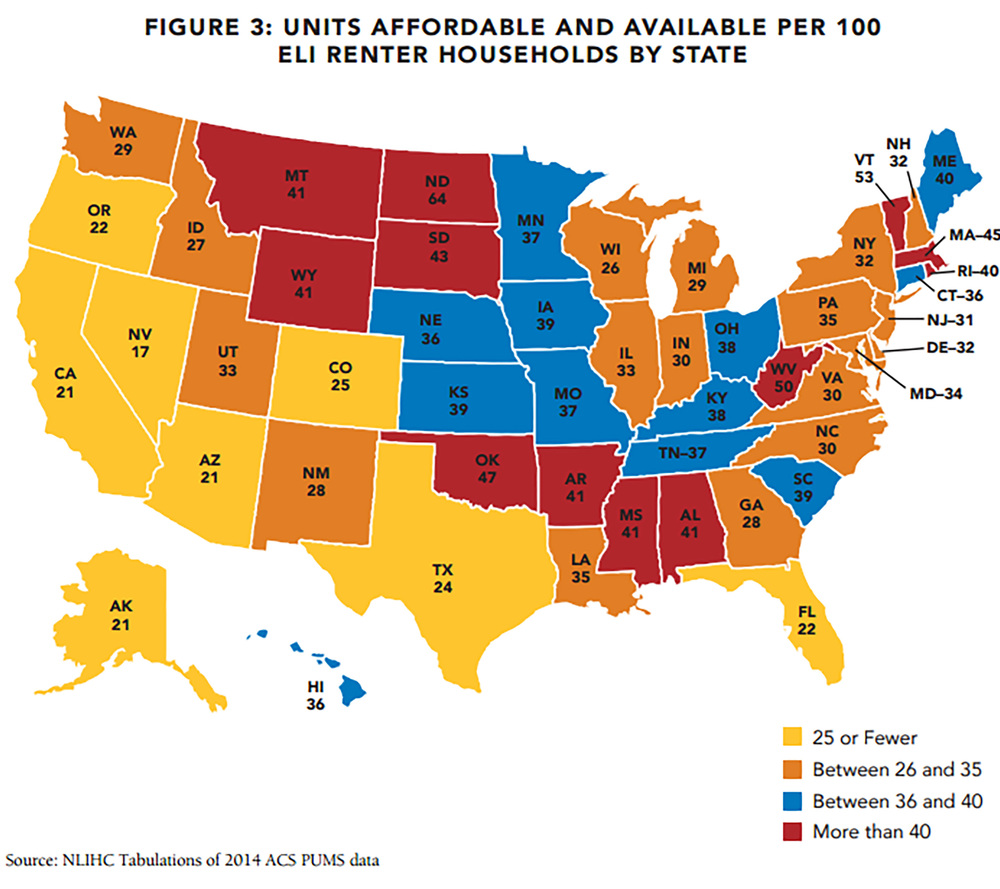 Despite shortage and cost burden, Alabama fares better than most states on ELI affordability and availability

Every state in the United States is lacking an adequate supply of affordable and available housing for those classified as extremely low income renter households.

Alabama is no exception, but according to the National Low Income Housing Coalition's recent report "Gap: The Affordable Housing Gap Analysis 2016" Alabama has more affordable and available units for ELI renters than most of the other 50 states and D.C.

Alabama has 41 units affordable and available for every 100 ELI renter households, according to the study. The state is one of only a dozen with a 40/100 or more ratio, but there is still work to be done to shore up the gap for ELI households.

The Gap study said that in every state, at least 55 percent of ELI renters spend more than half of their income on rent and utilities. Also, the U.S. currently has a shortage of 7.2 million affordable rental units available to ELI renters, the report said, with a 31/100 ratio of affordable and available units nationwide.

According to NLIHC, the National Housing Trust Fund (NHTF) represents the first new stream of money dedicated to "expanding the supply of affordable housing for extremely low income households, those with 30 percent or less of their area median" income in over four decades.

"Given the costs of land acquisition and construction, production of new rental housing affordable to ELI households is nearly impossible without considerable subsidy," the report said. "Current federal affordable housing production programs allow rents that are too high for ELI renters. To live in new federally assisted affordable housing, ELI renters must have additional housing assistance or face significant cost burdens. Meanwhile, in the past decade more than 46,000 Project-Based Section 8 rental units have been lost from the affordable housing stock through demolitions and contract expirations."

Currently, there are 43.2 million renter households in the United States, with 10.4 million of them being classified as ELI, the report said, with only 5.8 million rental units affordable to ELI renters (2014 data).

Below are some other major findings taken from the Gap study.

Falling interest rates helped offset rising home prices, leading to a slight gain in home affordability from one year ago.