Last Friday’s ACREcom marked the 20th year of the Center’s Commercial Real Estate Conference and Expo. This week’s WIN will summarize the insights shared at the conference, including key points regarding the direction of commercial real estate moving forward.

K.C. Conway, ACRE’s director of research and corporate engagement and the CCIM Institute’s chief economist, kicked off the conference with his commercial real estate and economic outlook. He noted that the Alabama economy is booming from Mobile to Huntsville, while climbing the rankings in several key areas. The state was recently ranked the best place to manufacture, was number six on U-Haul’s in-migration report, and ranked in the top 10 for foreign investment. 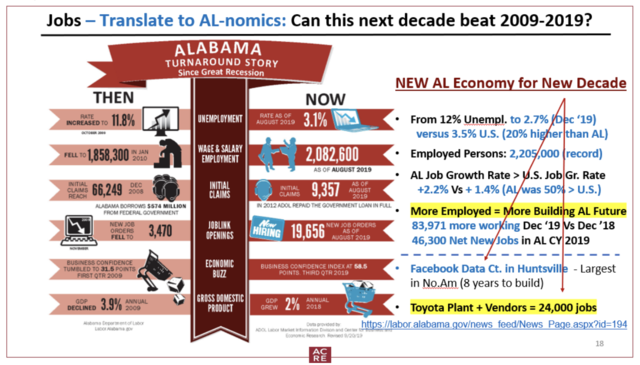 Conway also highlighted the state’s much improved unemployment rate, which hovered around 12% ten years ago versus 2.7% in December 2019, a record low. Total employment is also at a record high with over 2.2 million jobs. Alabama’s job growth rate of 2.2% was also well ahead of the national average of 1.4%. The future of Alabama’s economy is also bright when one considers several large-scale projects that are currently underway. The Toyota-Mazda plant in Huntsville is expected to add 24,000 jobs (including vendors). Facebook also has a data center planned for the Huntsville area that is expected to be the largest in North America. 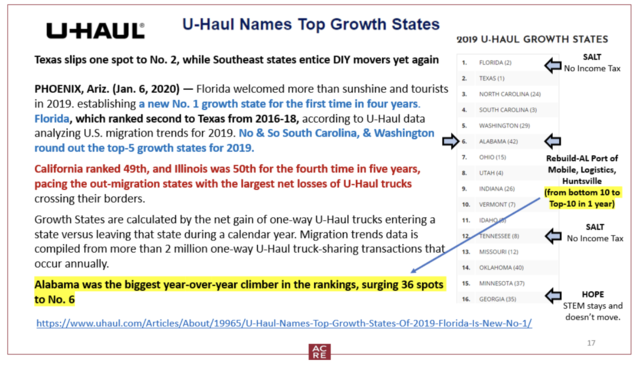 Conway then focused on Alabama’s large jump in the U-Haul migration trends report, going from the bottom 10 to the top 10 in just one year. Alabama ranked sixth for in-migration during 2019, a large improvement from 42nd in 2018. Florida improved from second to first, which showcases the competitive advantage of not having a state income tax. Southeast states took four of the five top spots, while high-tax states including California and Illinois were ranked 49th and 50th. 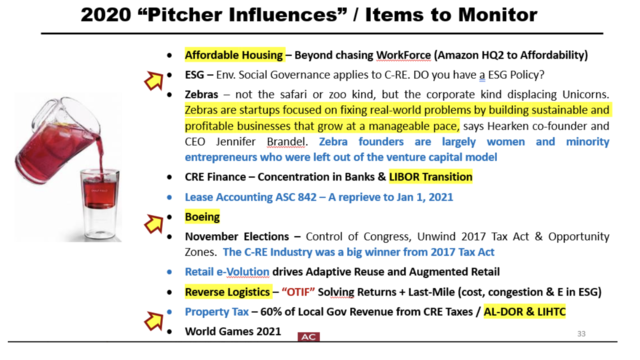 Another theme from Conway’s CRE and economic outlook were his “Pitcher Influences” (it’s not whether your glass is half-empty or half-full, but who is controlling the pitcher). States who struggle with affordable housing will continue to struggle with economic growth. Housing in Alabama is quite affordable when compared to other states, which has helped attract the likes of Amazon, Walmart, Facebook, and others in recent years. Conway also urged those in attendance to develop an ESG policy to be ahead of the curve as this will only grow in importance in the coming years. In CRE finance, the questions surrounding LIBOR are on many people’s minds as it is slated for replacement in 2021. What will replace this benchmark which underpins approximately $200 trillion of financial contracts ranging from corporate loans and home mortgages? Going back to affordability, Alabama’s Department of Revenue plans on taxing LIHTC as real estate, jeopardizing the state’s housing affordability in the years to come. 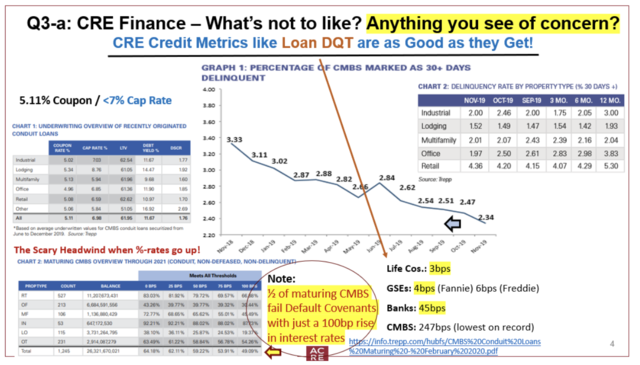 Conway moderated the capital markets panel, noting that while delinquency rates for CMBS are trending downwards to under 2.5%, half of maturing CMBS fail default covenants with just a 100bps rise in interest rates. This could indeed be a scary headwind if rates go up in 2020. Also discussed in the panel was a recent Trepp report that provided an underwriting overview of recently originated conduit loans, which showed a 5.11% coupon rate and a capitalization rate of 6.98% on average for all property types.

The next session was an industry leaders panel with the CEO’s of four leading CRE organizations: Greg Fine with CCIM, Jim Amorin with the Appraisal Institute, Tom McCormick with SIOR, and Denise Froemming with IREM. All four CEO’s agreed that recruiting and training the next generation of talent in the commercial real estate industry was a top priority. Also on the mind of the industry CEO’s was the LIBOR transition, the growing importance of ESG issues, and the growing potential of adaptive reuse, especially in light of the growing number of retail closures. However, the panelists agreed that adaptive reuse goes well beyond filling vacant retail, and the rising popularity of historic preservation, along with rising construction costs, only add momentum to adaptive reuse. 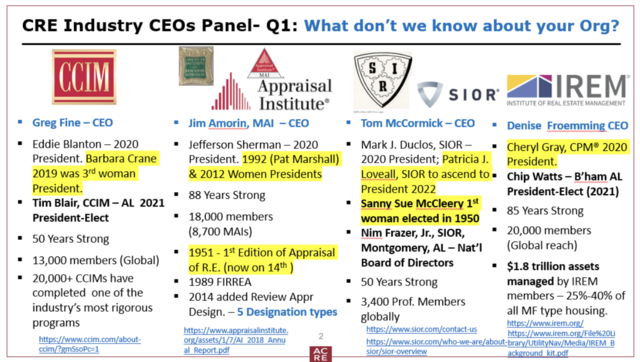 Building on the growing importance of ESG, each organization cited examples of women in leadership roles. Examples include Barbara Crane as the 2019 president of CCIM (third overall), two past presidents of the Appraisal Institute, SIOR with the first woman president elected in 1950 and a Patricia Loveall ascending to president in 2022, and Cheryl Gray as the 2020 IREM president.

Next was the ULI Emerging Trends panel. Scott McLain, CCIM, and K.C. Conway, MAI, CRE noted that Birmingham was the only MSA in the state to make the top-90 MSAs to monitor in 2020. Both agreed that housing affordability is a prominent issue even in states like Alabama that are relatively affordable versus the nation as a whole. The trend of limited inventory for sale is seen in markets across the state and nation, but listings are especially tight in Huntsville. The area had fewer than 1,000 residential listings in December 2019, and inventory declines of 20-30% year-over-year are the new normal. The panelists agreed that an increase in new housing units would be necessary to accommodate the city’s growing population. Also, with 25,000 jobs anticipated with the Toyota-Mazda plant (vendors included) and Facebook’s mega 8-building data center, where will these additional workers find housing? Scott McLain also noted the growing importance of VUCA (volatility, uncertainty, complexity, ambiguity), which may well explain everything from the political divide in Washington D.C. to the Coronavirus and the changing use of commercial real estate.

Nick Sellers, CEO of The World Games Birmingham, delivered the lunch keynote address and focused on the impact the games would have on Birmingham and the state as a whole. The forecasted attendance is 500,000+ and the games have an anticipated economic impact of $256 million. He also noted that the World Games will be the largest international event in the Southeast since the 1996 Olympics in Atlanta. The games will be broadcast internationally by NBC.

The afternoon session began with Russ Ward from the University of Alabama at Huntsville. With a background that includes work for the Department of Defense, Ward provided a general overview of cybersecurity threats including web attacks, formjacking attack, ransomware, and malicious email. Ward urged attendees to avoid the usual human tendencies that make us prone to cyber attacks including falling for phishing scams, letting unauthorized users access data, reusing passwords, and oversharing sensitive information.

Alex Flachsbart from Opportunity Alabama presented on “the opportunity in opportunity zones.” He gave a general overview of the OZ program from its introduction in early 2017 to the final guidelines published on January 13, 2020. The presentation also included specific examples of opportunity zone tax benefits and the different deal types. Flachsbart also noted that the OZ program is not limited to real estate deals, and provided examples of operating companies that can qualify for OZ tax benefits.

Cherie Moman, ACRE’s director of education, marketing, and communications delivered the final afternoon session on maximizing the potential of LinkedIn. Moman’s presentation included insights about how to use one’s profile and background pictures for maximum business potential. A unique networking feature was also displayed, which allows a user to connect with others via their current location. This is especially useful at conferences or similar events. Moman also showed the audience how to brand themselves as an expert by posting organic content on a regular basis.

Thank you to all of our sponsors, support group members attendees for making the 20th anniversary of ACREcom great! Save the date for ACREcom21 on Friday, February 5, 2021 at The Club in Birmingham.

Have a great week!

Chicago lags behind other big cities in Opportunity Zones projects

Reonomy To Expand To The West Coast, Plans To Open LA Headquarters

Inside Moody's Analytics' CRE Data Play, 1 Year After Its Launch

6 Predictions for Coworking in 2020

There are no events for the selected calendar.