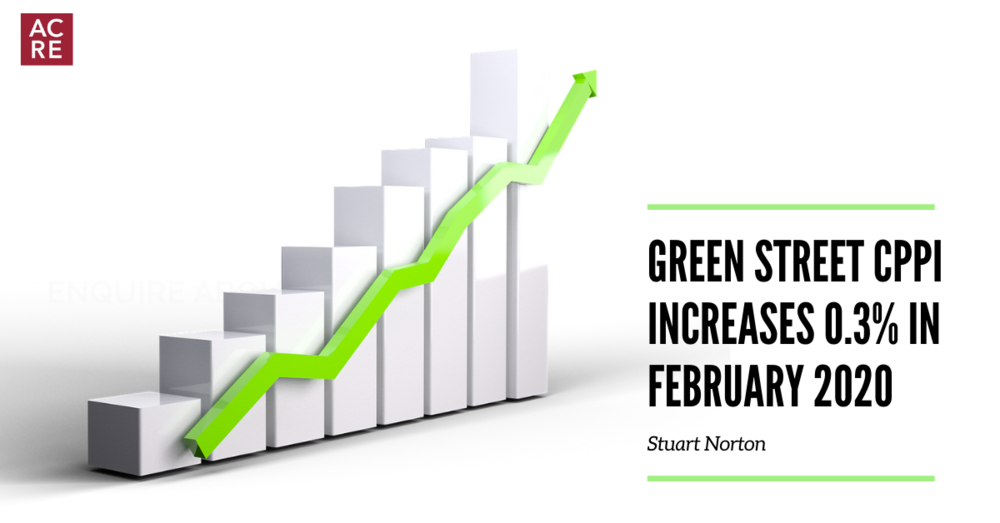 Driven by modest price gains in manufactured home parks and multifamily properties, the Green Street Commercial Property Price Index* (CPPI) increased 0.3% month-over-month and increased 2% year-over-year. The all property** index is down 0.1% over the past 3 months. The core sector index, which is calculated based on an equal weighting of apartment, industrial, office, and retail, was unchanged from January and unchanged over the past 3 months, while it gained 3% during the last 12 months.

“Except for retail where values continue to fall, property prices have been either stable or rising over the past few months,” said Peter Rothemund, Managing Director at Green Street Advisors. “Unfortunately, the spread of the coronavirus to countries outside Asia - and the growing alarm in the U.S. - has put the long-running economic expansion in jeopardy, and it is likely that many investors will hit pause and sit on the sidelines for a while.” 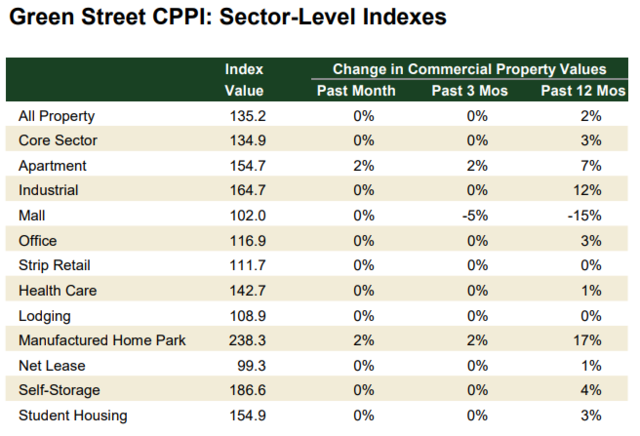 Manufactured home parks are currently the best performing commercial property type during the last year. The index score of 238.3 represents 17% growth. Other strong performing sectors include industrial (12%), apartment (7%), and self-storage (4%).

According to a report from Marcus & Millichap, a shortage of affordable housing units is causing increased demand for manufactured home parks. Apartment vacancy rates have declined over the last 12 months in all regions of the nation, leading to a general rise in rents. This trend is expected to continue in the quarters ahead as construction of new affordable housing units is not expected to keep pace with demand, with many consumers choosing manufactured home parks as a result.

With a February reading of 102, the mall index has the largest decline of all property types as it dropped 15% over the last 12 months, making it the only property type in the Green Street Index that’s down during the last year. Lodging and strip retail are also underperforming somewhat as their index values are equal to one year ago. Other sectors with little growth over the last 12 months include health care and net lease (each 1%).

Malls across the nation have struggled to adapt in recent years to changing consumer behavior. Foot traffic is down as many big-box retailers have closed underperforming stores, shifting their focus to flagship locations. Macy’s, for example, plans to close approximately 125 low-performing stores over the next 3 years, representing about 20% of the company's locations. This trend will especially impact lower-tier malls as their struggles will only grow with the loss of anchor tenants.

Valuing CRE during a period of “Material Change”

While valuation uncertainty rises during peaks and troughs to market cycles, lenders and investors still struggle to define the new normal and determine where it is safe to re-enter the market ...

What Is Connecting Businesses and Real Estate Before and During COVID-19?

The COVID-19 outbreak came during our most technologically advanced age; however, there are some decades old infrastructure items that are keeping us connected today - and vital to our reconnection post ...