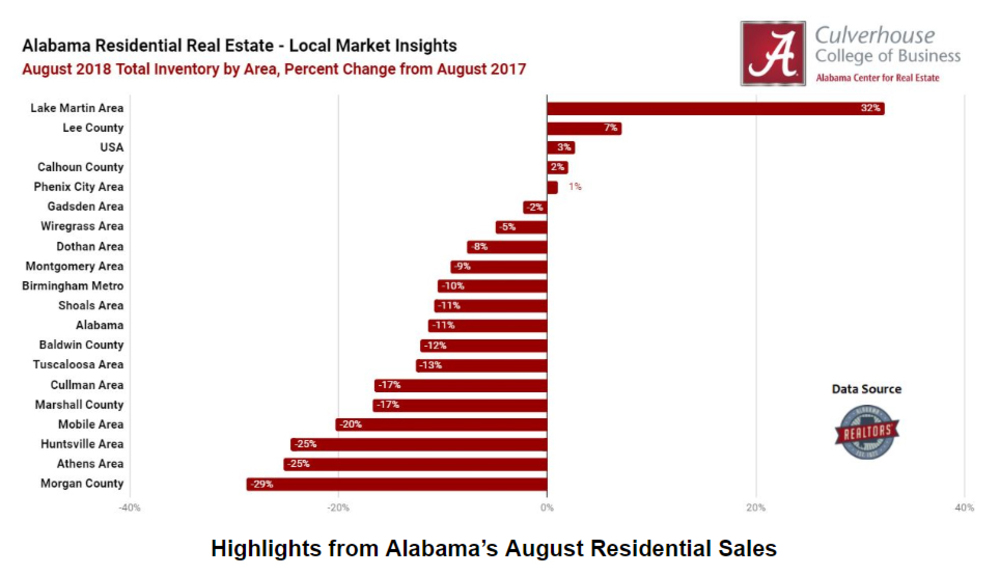 Overview: Nationwide, residential inventory increased 2.7 percent from 1,870,000 to 1,920,000 listings. This is significant because it marks the first year-over-year inventory gain in 3 years. This recent shift in listing activity suggests that nationwide inventory will trend upwards during the fourth quarter of 2018. With more listings on the market, it is likely that home price appreciation will cool off to some degree, creating an opportunity for more first-time homebuyers to enter the market.

In Alabama, however, inventory shortages are the norm as residential listings decreased 11.4 percent from one year ago. Only six of 24 markets witnessed year-over-year inventory gains during August. The Lake Martin area led the way with a 32.3 percent increase in residential listings from one year ago. The remaining five markets with year-over-year inventory gains include: Covington County (13.8 percent), Lee County (7.1 percent), Monroe County (3.3 percent), Calhoun County (2 percent), and Phenix City (1 percent). Inventory shortages were most extreme in the north Alabama region with Huntsville having only 2.3 months of supply (MoS), Decatur with 2.6 MoS, and Athens with 2.7 MoS. These were the only markets across the state to have less than 3 months of supply during August. Other strong seller’s markets across the state include Lee County (3.0 MoS), Mobile (3.5 MoS), and Tuscaloosa (3.6 MOS). The statewide average during August was 4.1 months of supply, while it was 4.3 nationwide.

Inventory shortages played a major role in driving prices upwards during August. The statewide median sales price increased 2.9 percent year-over-year from $158,059 to $162,711. The nationwide median sales price also saw growth but to a greater degree as it increased 4.6 percent year-over-year from $253,100 to $264,800. Year-to-date, median sales prices are up 5.3 percent in Alabama and 5 percent nationwide. While nationwide inventory is trending in a different direction than Alabama’s, it will be interesting to see how this impacts home price appreciation as we enter the fourth quarter of 2018.

Average number of days on the market (DOM) statewide during August, second lowest statewide average DOM in ACRE’s database which goes back to January 2000

Statewide months of supply during August, down from 4.8 one year ago 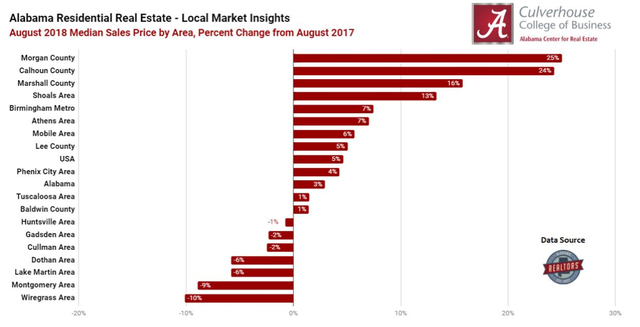 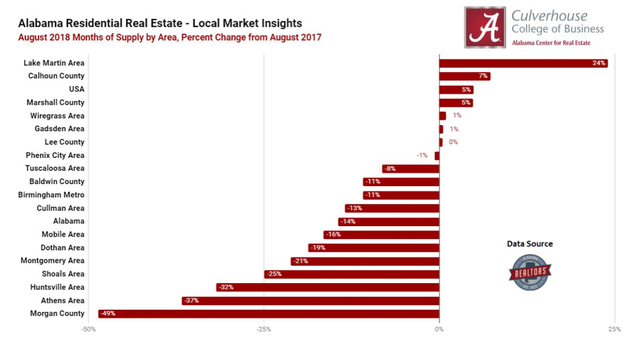