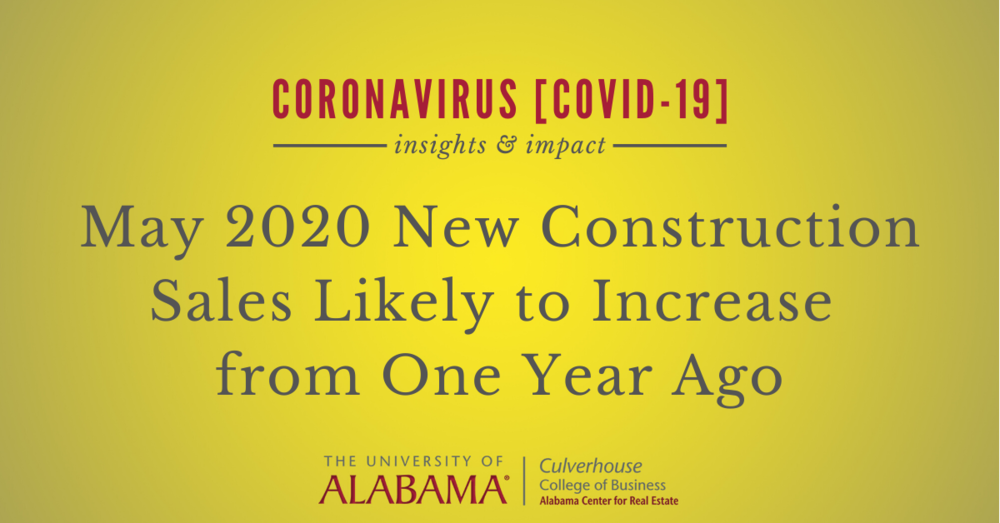 May new construction sales likely to increase from one year ago

With 11 of 13 markets reporting new construction sales data from May, it is likely that total new home sales will increase around 1-2% from one year ago. Although the projected gain is slight, increasing sales activity is a positive sign for the state’s new construction market, especially considering that total residential sales were down 9% year-over-year in April 2020, and another decrease is expected in May.

New construction sales increased in seven of the 11 markets reporting closed sales activity for May. In Huntsville (Madison County), total sales increased 16.5% year-over-year from 194 to 226 closed transactions, and the area continues to lead the state in new construction sales activity. New home sales represented 33.1% of all transactions in the Huntsville area during May, roughly double the statewide average of 15%.

Mirroring trends in the resale market, the statewide median sales price for new construction is expected to increase by approximately 8-10% in May. For context, price growth has been relatively flat (year-over-year increases in the 1-3% range) for new home sales in Alabama in recent months. Check back in next week for the final May numbers in ACRE’s New Construction Report.

Another positive note this week for housing was rising homebuilder sentiment, which increased 21 points in June, the largest ever monthly increase in the National Association of Homebuilders /Wells Fargo Housing Market Index. The index now stands at 58, and any reading over 50 represents an overall positive outlook. Homebuilder sentiment posted a historic drop in April, declining a record 42 points down to an index score of 30.

All three areas of the index (current sales, sales expectations, and buyer traffic) increased in June, and the rebound in builder sentiment was quicker than expected.

Dean Mon, Chairman of the NAHB and a New Jersey homebuilder and developer said, “As the nation reopens, housing is well-positioned to lead the economy forward. Inventory is tight, mortgage applications are increasing, interest rates are low and confidence is rising.”

Lennar, one of the nation’s largest homebuilders, reported better than expected quarterly earnings prior to the NAHB report. The company halted housing starts and land acquisitions in March, but has quickly reversed course as many states have reopened their economies. The company’s chairman Stuart Miller noted that many builders are focusing on suburban versus urban developments as consumers rethink how they want to live in an era of lockdowns and shelter-in-place orders.