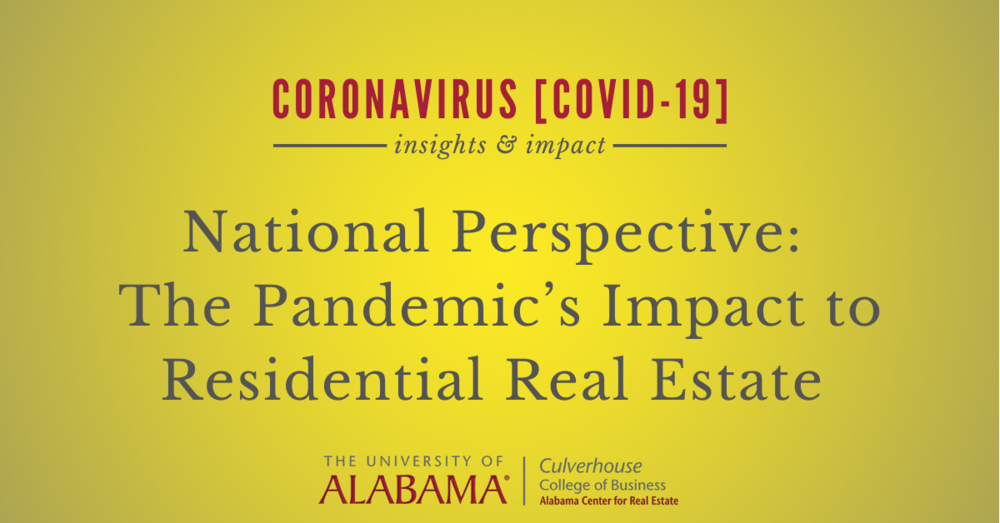 During the National Association of Realtors (NAR) Virtual REALTORS® Legislative Meetings held May 11-15, 2020, Dr. Lawrence Yun, chief economist for NAR, analyzed the impact of the coronavirus pandemic to residential markets in the nation. Yun touched on a variety of subjects including job losses, the record stimulus package, mortgage rates, April housing market indicators, and a comparison to the Great Depression (the two are quite different).

Payrolls recently posted a record decline, and the unemployment rate is rising, but the stimulus package, which was of record size, is addressing the situation. Yun gave an example where it is likely that a significant number of workers (he gave a cashier at Macy’s as an example) have higher incomes through unemployment than they did on the job. While layoffs in some sectors are more extreme, like in the leisure hospitality industry, the education and healthcare industries should recover more quickly with states reopening their economies. Daycare centers are likely to reopen in the foreseeable future, and outpatient surgery centers should see a significant rise in activity as stay at home orders are lifted.

Closer to home, while sales were very solid in the first quarter (pre-pandemic), as anticipated, several metro areas in Alabama have reported a pause in demand as reflected in April housing statistics. Residential sales in the Birmingham-Hoover area were down almost 14% year-over-year. Other markets with April sales declines include Baldwin County (-23%), Dothan and Tuscaloosa (both -8%). Despite this pandemic-driven trend which is likely to continue into the summer months (and perhaps beyond, too early for a definitive statement), the more favorable news thus far, however, is that sales prices have largely remained stable. This data indicator does come with a caveat that the law of supply and demand and its relationship with pricing is always at work so any prolonged weakness in demand would ultimately translate to some softness in price in the future, and consumers should be mindful of this market dynamic.

The nationwide market has also seen slowing sales activity in April. Pending sales were down 25-30% year-over-year in the Midwest and South, while they are down 45-55% in the Northeast and West. New listings are also down as well, at an estimated decline of 40-45%. States currently favoring better include Georgia, Texas, and Utah, while states faring worse include California, New York, Michigan, and Pennsylvania. Yun noted that Georgia was the first state to reopen and sales activity has recovered somewhat in response, but states like Pennsylvania have seen declines in the range of 80% year-over-year as shelter in place orders remain in response to COVID cases.

With unemployment rising to possibly 20% (NAR forecast) in 2020, many are comparing the current pandemic to the Great Depression, when unemployment was in the 25% range. Today is different, however, as large income support from a record stimulus package has provided relief to some degree. In the 1930s, job losses declined steadily for 5 years, while today the losses were abrupt and could last as little as 5 months (Yun noted this with a question mark (?) on the slide). Even with the New Deal, government spending contracted in the 1930s to balance the budget while today it has expanded to provide income to Americans. And monetary policy contracted in the Great Depression while it is currently “loosened to the max.”

Even with the large losses in employment, 60-70% of Americans still have secure employment and mortgage rates are very low. Someone who buys today with a rate in the 3.25% range will likely find themselves in a favorable situation in the future if inflation drives the value of their home up (while their monthly mortgage payment is fixed). Yun was very straightforward when discussing how the record stimulus package was funded: by the printing of more U.S. dollars. This does bring in the risk of inflation, similar to the U.S. during the 1970s when rising inflation was referred to as the “misery index” and high inflation pushed up mortgage rates. Yun noted, however, the strength of the U.S. dollar, which is quite different from the Venezuelan Bolivar, which suffered rapid inflation when more currency was issued.

Yun then discussed the possibility of delayed inflation in 2025-2030. The FED aims for an inflation rate of 2%, and it's possible that it could increase to the 4-7% range. Mortgage rates could rise as a result to the 6-9% range, and inflation would have a negative effect on home sales. Home price appreciation, however, would continue to trend upwards at levels seen recently (5-10%).

The webinar concluded on a positive note, touching on “the advancement of civilization.” People in many countries around the world, and especially in the United States, have their basic needs covered for the most part (enough to eat) even in a time of a global pandemic, a sharp contrast to not long ago when people have starved, even in “normal” economic times.