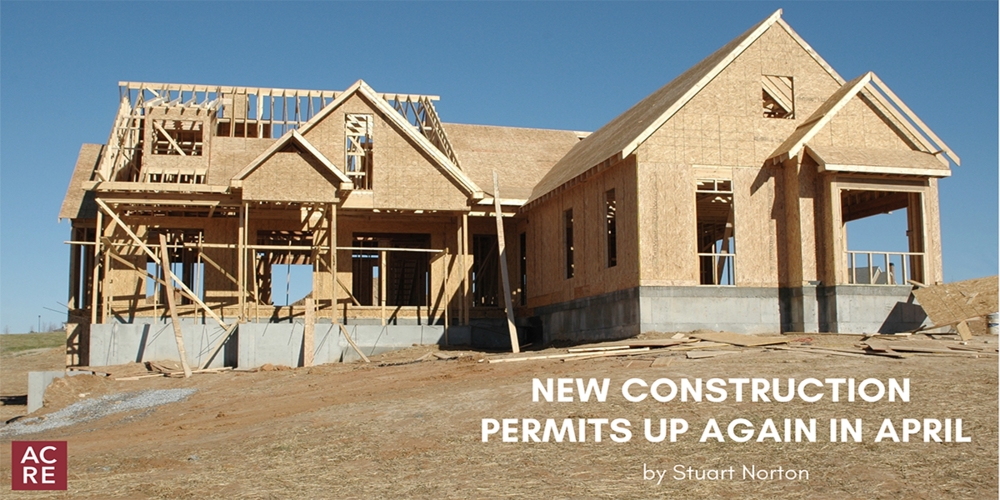 While permits for new single family housing units declined 4.3 percent nationwide and 5.8 percent in the south region, they increased in Alabama during April. Single family permits in the state increased 7.4 percent year-over-year (y/y) from 1,282 in April 2018 to 1,377 in April 2019. Gains in March and April helped erase February’s decline, and permits in Alabama are now up 6.4 percent year-to-date (YTD).

Permits in Alabama are now up on the year thanks, in part, to impressive growth in Huntsville’s new construction market. Permits issued in the metro area in April increased 1.7 percent y/y, bringing YTD growth to an impressive 27.1 percent thus far in 2017. The Huntsville metro area leads the state in total permits in 2019, with 1,139 through April, while the Birmingham-Hoover metro area is second with 950. This is even more impressive when one considers the population estimates for both areas: 455,500 in the Huntsville metro area and 1,130,000 in Birmingham-Hoover. Additionally, many economic development projects are underway in the Huntsville area, including the Toyota Mazda manufacturing facility. This will give added energy to an already strong new construction market as population and job growth continue to trend upwards in the area.

However, the boom in new construction activity in north Alabama is not limited to Huntsville. Permits for new construction in the Decatur area are up 59.1 percent YTD from 2018. With a strategic location along the Tennessee River, access to two Class I railroads (Norfolk Southern and CSX), and nearby I-65 it is no surprise that 12 Fortune 500 companies have invested in the Decatur area. Moving to the northwest corner of the state, Florence-Muscle Shoals has also experienced a rise in new construction activity as permits are up 5.8 percent YTD from 2018. Other markets in the north Alabama region with significant permit gains include Anniston-Oxford-Jacksonville (up 28.6 percent YTD) and Gadsden (up 7.6 percent YTD). As the region’s economy continues to grow and diversify, expect cities in the north Alabama region to continue to lead the state in permit growth rates.

Impressive growth in new construction permits was also seen in the Mobile area during the first four months of the year. Even though permits dropped 6.1 percent y/y in March, they rebounded in April by increasing 45.9 percent y/y, bringing year-to-date growth to 29.4 percent. Moving to the eastern shore, permits in the Daphne-Fairhope-Foley area increased in April after a significant decline in March, bringing the area’s YTD permit growth rate to 1.4 percent. The area ranks third in total permits YTD through April, which is impressive for a metro area that has roughly 210,000 residents. 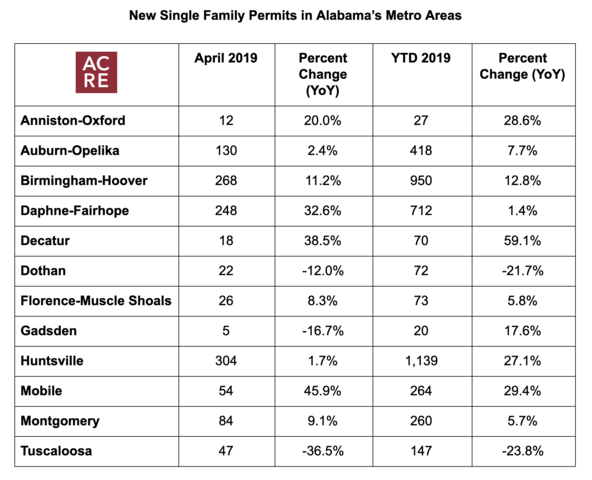 The Alabama Center for Real Estate created these rankings based on new construction as a percentage of total residential sales during August 2019.

While Alabama’s permits are up 3.7% year-to-date (YTD), permits are down 3.3% in the south region and down 5.5% nationwide, hinting that new construction markets in Alabama are going against regional ...

The Alabama Center for Real Estate created these rankings based on new construction as a percentage of total residential sales during July.