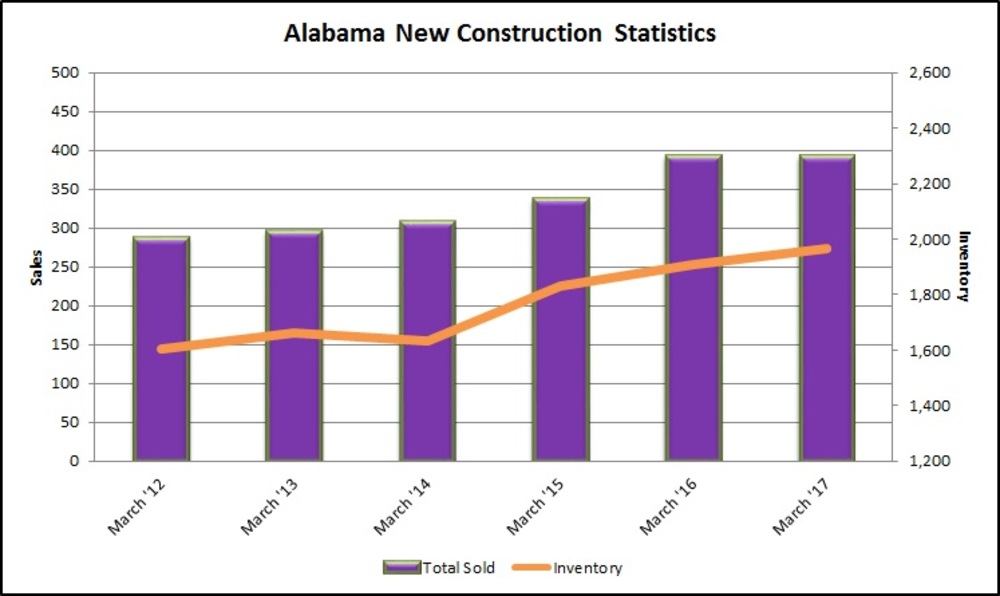 March new home sales in Alabama grew 24 percent compared to the month of February and were slightly lower than March 2016.

According to the Alabama Center for Real Estate's lastest New Construction data, March new home sales in the five major markets in Alabama totaled 390 units, one shy of last year's mark. There were 314 new homes sold during February.

Here's how the five markets stacked up for March.

Here's some other information from the March New Construction report for the state of Alabama and the United States.

Supply: Months of new home supply in March was 5.0 months. Statewide new construction inventory is approximately 3 percent above last March and up 3 percent from last month.

From Robert Dietz, NAHB chief economist: "The March sales numbers are the second highest on record since the Great Recession, which is especially encouraging considering the poor weather conditions throughout many parts of the country. With tight existing home inventory, rising household formations and continued job creation, we can expect further growth in new home sales moving forward.”

Based on large year-over-year permit gains in January and February, housing starts are off to a fast start, yet uncertainty surrounding the COVID-19 pandemic clouds the forecast somewhat.

Properties listed for sale in the area remained tight in February, decreasing 32% from one year ago.

Sales are up 18% on the year but are likely to moderate amid the COVID-19 pandemic.