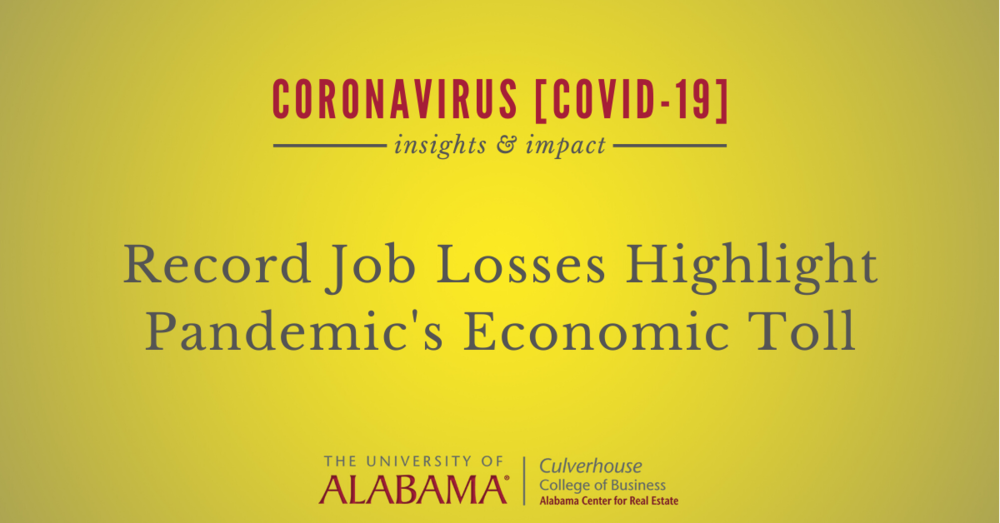 Friday, May 8, 2020, the market learned that job loss from “Shelter in Place” orders during April were as feared – the worst since the Great Depression. The Bureau of Labor Statistics (BLS) reported Total Nonfarm Payroll Employment fell by 20.5 million jobs in April after declining by 870,000 in March and the unemployment rate rose to 14.7% from less than 5% in March. As shocking as this figure is, it was not unexpected after the warning from ADP earlier in the week.  ADP reported that Private Sector Employment decreased by 20,236,000. More than 75% of the private job losses were by service-providing companies (16 million). 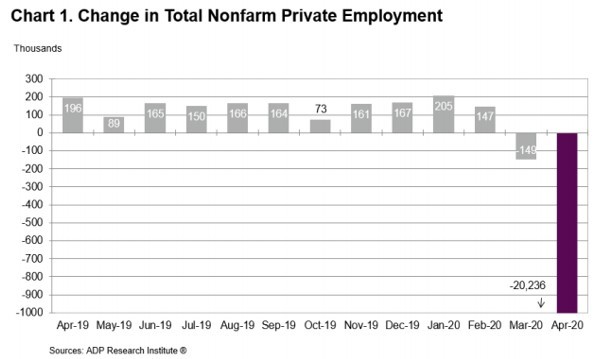 The BLS report was not inconsistent with ADP’s numbers on Wednesday. According to the BLS press release, “the April over-the-month decline is the largest in the history of the series (dating back to 1939), and it brought employment to its lowest level since February 2011.” Job losses were widespread, with the largest employment decline occurring in leisure and hospitality (not surprising) losing 7.7 million jobs or 47% of the employed workforce in this sector. But the job losses were also unprecedented in other areas as well.   The top sectors with job loss were:

The picture – or in this case two – is worth more than the thousand words that could describe the BLS April jobs report:

And although the record job losses in aggregate were not a complete surprise, some of the losses may seem counter intuitive. A couple include education and health services (students stayed engaged in remote learning, and health workers which at first glance appeared in high demand to treat COVID-19 victims). Workforce in both these sectors seemed either undisrupted or still in high demand until the dots are connected regarding non-faculty at schools and universities and cancelation of non-essential medical services. Job losses to non-faculty areas at schools and universities (food services, janitorial, and even athletic and arts & entertainment) that sent students home was substantial. And, losses in medical services came as non-essential medical services and elective surgical procedures were postponed or cancelled. While Labor Secretary Scalia believes half of the jobs in these two sectors will rebound quickly as states reopen (and nearly completely by Q1 2021), other sectors face a more uncertain outlook.  Energy is one such sector. Following the April jobs report, Baker Hughes reported its monthly oil rig count in operation for the U.S., Canada and globally. The U.S. rig count fell another 34 rigs to just 374 breaking the last record low in registered in 2009. That figure is a decline of 614 from one year ago – or nearly 60%. The global oil rig count is down nearly 800 rigs or 50% from a year ago. Despite this decline in production, oil remains at prices half what they were at the beginning of 2020. Job losses in energy (downstream and upstream, producers and drillers, refiners and distributors, etc.) will be in the hundreds of thousands and spread much beyond the Texas region up into the Midwest and Pennsylvania shale regions.

And there are many more industries facing more job loss or extended periods where workers are furloughed or displaced. The transportation sector is one. The American Truckers Association (ATA) truck tonnage index is flat as truckers await inbound shipments to resume at ports and auto manufacturing to restart. Rail traffic as reported by the American Association of Railroads just reported its worst total rail car and intermodal container traffic figures in history as global trade locked up and has yet to resume. Auto plants, like those by GM and Mercedes in Alabama are just resuming operations on single-shift levels to allow time for workforce to return, be tested daily and plants cleaned in between shifts. And the TSA Passenger-Throughput figures are still down 95%. A lot must get moving again for these unemployment numbers to come down. Retail is also decimated with the National Restaurant Association (NRA) reporting staggering job losses. And it is across all dining types. Take-home/carry-out is only recouping 25%-35% of lost sales. The latest NRA Restaurant Impact Survey for the April period is as follows:

And the just published RailTIme Indicators (RTI) report by the American Association of Railroads (AAR) revealed all is also “not working all the live-long day on the rails.” According to AAR and their May RTI report for the April period, total originated carloads on U.S. railroads fell 25.2% in April, their biggest year-over-year percentage decline since at least 1989 and probably for much longer when their record tracking began. U.S. rail intermodal originations fell 17.2% in April 2020 from April 2019. Carload declines in April were paced by big declines for energy, chemicals and autos.

The Employment Situation report by the BLS indicates every sector’s piece is broken – some temporarily but many structurally, such as retail, leisure & travel, and maybe even energy. It is going to take the Federal Reserve, Congress, governors, mayors and CEOs of large and small companies to put the employment pieces back together again.  This is not likely to occur quickly with the wave of the “States-Reopening” wand. Budgets at all levels (government, business and consumers) are damaged and will impact the rehiring as CapEx has been gutted in every sector and company to weather the storm. The best advice now is to look at the forward-looking metrics, such as TSA Passenger-Throughput, NFIB SBOI, NAHB HMI, RailTIme Indicators, public company earnings in various sectors (Southwest and Delta in travel; Weight Watchers and Subway in retail and restaurant; ProLogis and Monmouth MREIC in industrial CRE and UMH in affordable housing), and credit reports by banks, Equifax and CRE perm debt monitoring entities like TREPP.