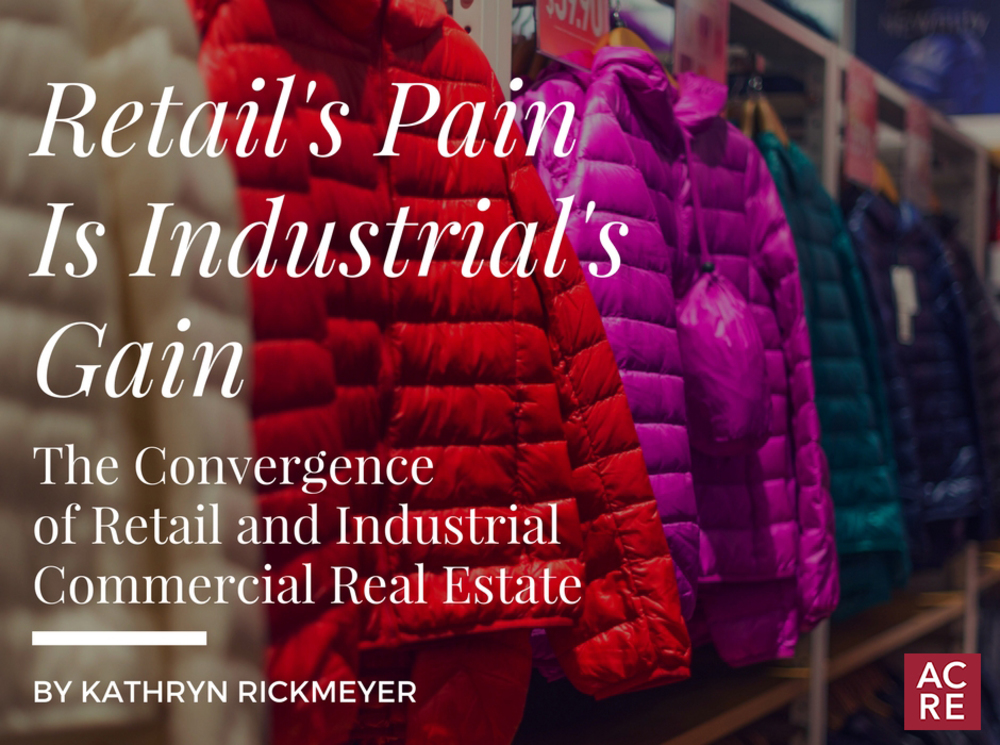 Retail’s Pain is Industrial’s Gain: The Convergence of Retail and Industrial CRE Sectors

“As the retail industry is revolutionized by e-commerce sites like Amazon, retail and industrial spaces are becoming one in the same,”said ACRE’s Director of Research and Corporate Engagement and CCIM Chief Economist KC Conway.

High-tech disruptions in the mainstream marketplace are creating a brilliant convergence between retail and industrial sectors.

Rather than being used to temporarily store products before shipping them to retailers, industrial buildings are benefitting from increased demand that results from more consumers relying on e-commerce to buy everything from shoes to groceries.

The dramatic shift in the retail industry and growth of e-commerce have led some analysts to estimate that 400 or so of the roughly 1,100 malls in the U.S. will close in the coming years, according to an article by the Wall Street Journal.

With wide open spaces in central locations, dead malls are coming back to life as logistics and fulfillment centers for these e-commerce companies.

“From a logistics perspective, the key will be having well-located distribution centres to service their shops and customers directly. This is leading to a net increase in the demand for quality distribution space,” said Michael Fenton of JLL

The numbers back the commercial conglomeration.

The latest figures from JLL pointing towards take-up of Industrial space nationally being on track for a record result in 2017. Since 2015, the annual gross take-up recorded by the retail, wholesale and the transport, postal & warehousing sectors has been 54% above the 10-year average. Over the past 10 years, annual industrial take-up averaged 125,474,903 square feet. Over a 10 million square feet in industrial leases were recorded in the first half of this year alone.

“Nearly half of the businesses we service have closed their blinds. They are using their retail space as e-commerce fulfillment facilities now. Their sites generate significantly more revenue than their brick and mortars did, but their space is still just as a valuable. Without it- they have no logistics center,” said Founder and CEO of Comment Sold Brandon Kruse.

Comment Sold is an Alabama based software company that enables businesses to automate all of their exchanges with scheduled product posts to facebook and allows users to purchase products by commenting on the item. The tech company services over 2,000 online boutiques.

These numbers are reflected in United State’s industrial market’s 97 percent occupancy and continued demand for new space, both speculative and built-to-suit.

This is not to say that traditional retail real estate is extinct.

Experience-based retail in downtowns are witnessing strong absorption rates and commanding high rents. Vacancy rates in these shopping centers rose in 34 of 77 U.S. metro areas in the third quarter from the same period a year earlier, according to data from real-estate researcher Reis Inc. That was an improvement from the second quarter, when 39 metro areas recorded year-over-year increases. Wall Street Journal

However, suburban retail real estate is experiencing a slight setback as millennials flock toward urban cores.

Cushman & Wakefield reported that U.S. industrial markets absorbed 63.6 million sq. ft. of space in the final quarter of 2016, which propelled net absorption for the year to a record-setting 282.9 million sq. ft.

What does this mean for cap rates?

These robust figures are a descendant of the online retail iditarod.

The anomalous hybridization of these two sectors are reconceiving the modern commercial real estate industry.