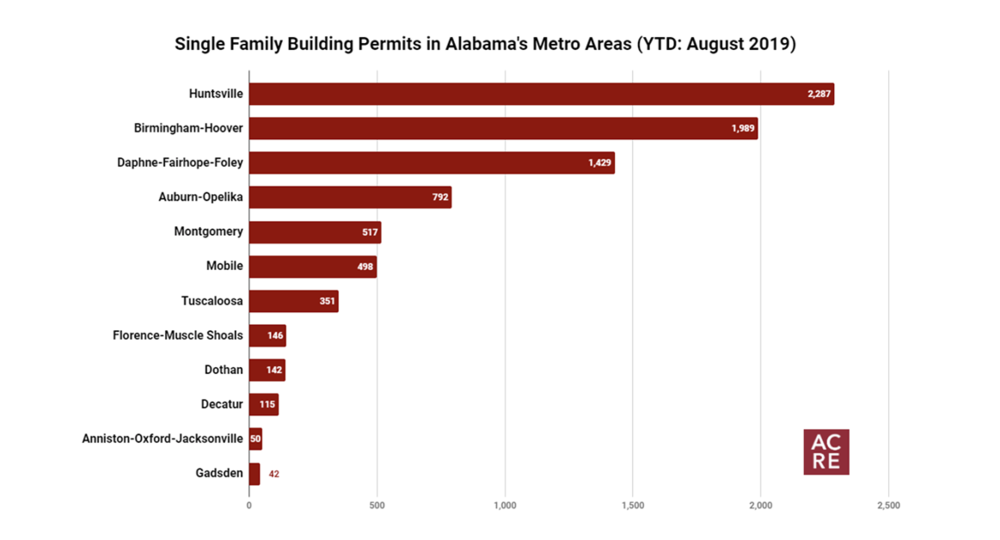 Permits for new single family housing units posted year-over-year gains in August, increasing by 0.7% nationally and 5.5% in the south region. They were also on the rise in Alabama, increasing 6.9% year-over-year (Y/Y) from 1,194 in August of last year to the current level of 1,276. While Alabama’s permits are up 4.1% year-to-date (YTD), they are down 2.2% in the south region and down 4.7% nationwide, hinting that new construction markets in Alabama are going against regional and nationwide trends.

Permits in Alabama are now up for the year since January 1st thanks, in part, to impressive growth in the Gadsden and in the Anniston-Oxford-Jackson area’s new construction market. August saw an increase in both of these markets, and permits are now up 23.5% YTD in Gadsden and 22% in Anniston. The Huntsville metro area leads the state in total permits in 2019, with 2,287 through August, while the Birmingham-Hoover metro area is second with 1,989. This is very impressive when one considers the population estimates for both areas: 455,000 in the Huntsville metro area and 1,130,000 in the Birmingham-Hoover. Additionally, many economic projects are underway, including the Toyota Mazda manufacturing facility that will produce 4,000 plus jobs when production begins in 2021. These strong economic development projects will give added energy to an already strong new construction market as population and job growth continue to trend upwards in the area. Huntsville’s population is estimated to overtake Birmingham within the decade so we can expect permits for new single family housing units in this area to remain strong in the future.

However, the boom in new construction activity in north Alabama is not limited to Huntsville. With a strategic location along the Tennessee River, access to two Class I railroads (Norfolk Southern and CSX), and nearby I-65 it is no surprise that 12 Fortune 500 companies have invested in the Decatur area. This is evident with the acceleration in the number of new permits so far this year compared to last year. August saw an increase of 18.6% YTD, which is top three in all metro areas in the state in YTD growth. Moving to the eastern side of the state, the Anniston-Oxford-Jacksonville area has also experienced a rise in new construction activity as permits are up 22.0% YTD. This is the second highest YTD growth in the state for the month of August.

Other markets in Alabama with significant permit gains include Gadsden (up 23.5% YTD) and Huntsville (up 13.0% YTD). As the region’s economy continues to grow and diversify, expect cities in the northern region of Alabama to continue to lead the state in permit growth rates. Of Alabama’s 12 metropolitan areas, only 2 have YTD permit declines in 2019: Dothan (-4.1%) and Florence-Muscle Shoals (-1.4%). 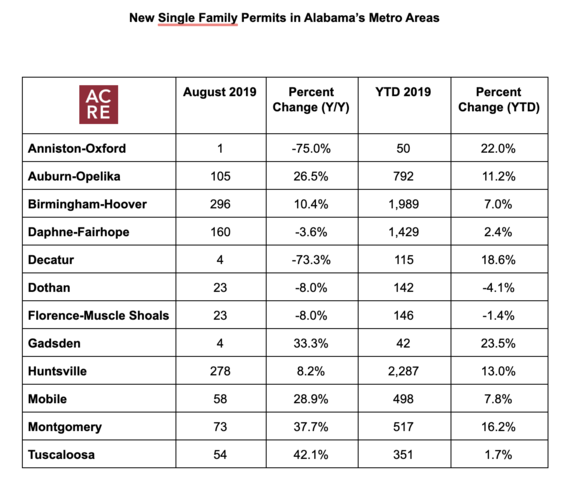 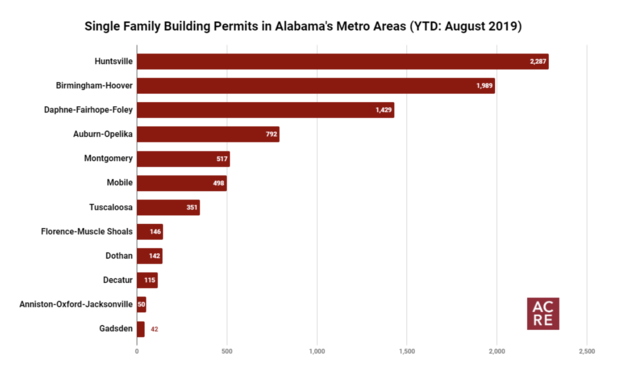