Are we there yet Economic Update 6 months Into COVID-19?

It was just 6 months ago in mid-March that shelter-in-place orders, occupancy restrictions, remote work and digital learning commenced as a new normal. Three months ago in June after states started re-opening, the answer to the “Are we there yet?” question seemed to be a hopeful "yes." The stock market certainly appears to indicate COVID-19 is more of a bull than a bear, but yesterday’s FOMC press conference by Fed Chairman Powell reminded us that while the economy has improved on many metrics, there is a long way to go until we can declare the pandemic recession is behind us. Going into Q4 in just two weeks, the outlook I have proffered remains bearish with a lot of uncertainty risk. There are seven metrics guiding this outlook, and seven primary economic and commercial real estate issues on my radar. This week’s WIN looks at the seven forward-guiding metrics and next week will cover the seven economic and CRE risk issues to have on your radar for the balance of 2020.

1. COVID-19 Cases: This week the total number of cases surpassed 29 million globally. The US remains the nation with the most cases at 6.5 million, but India is likely to surpass the US with nearly 5.0 million cases and the fastest increase rate. Within the US, New York and New Jersey no longer lead in case count. California, Texas and Florida now rank one, two, three, followed by New York and Georgia at number 5. Alabama now ranks number thirteenth with 142,000 cases. Understanding the case count by state and MSA is important to connecting the dots to where business activity and occupancy restrictions will re-emerge or persist, thus adversely impacting economic activity. Monitor the case rate in the bordering states to your north, south, east and west to appreciate how cross state border economic activity will be affected in Q4.

2. Employment: Fortunately, it is not April 2020 when we lost or furloughed 19.4 million workers nationwide. In July and August 2020, the rehire rates were positive 167,000 and 428,000 jobs, respectively. However, those figures are well off the 3.3 and 4.3 million rehires in May and June 2020, respectively. Alabama has recovered more quickly than many states and the U.S. overall with all auto plans reopened. The unemployment rate is below 8% and initial unemployment claims are below 10,000 for the first time since the first week of March 2020. That is the good news. The more concerning news is that Job Cuts announced by U.S.-based employers in August 2020 totaled 115,762, 116% higher than the August 2019 total of 53,480, according to Challenger, Gray & Christmas, Inc. August’s total is 56% lower than the 262,649 job cuts announced in July. It is the highest total in August since 2002, when 118,067 job cuts were announced. So far this year, employers have announced 1,963,458 cuts, 231% higher than the 592,556 cuts tracked in January-August of 2019. Announced job cuts in 2020 have surpassed the previous record annual total of 1,956,876 recorded in 2001. The leading sector for job cuts last month was Transportation, as airlines begin to make staffing decisions allowed end of September 2020 from the CARES Act, and uncertain future federal intervention. 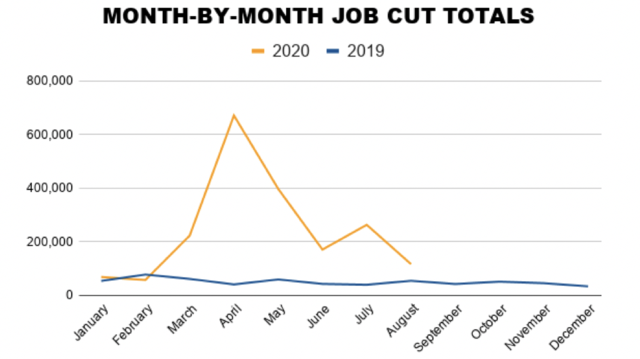 More job cuts are anticipated in Q4 and the nearly 2.0 million announced cuts this Summer will appear in the BLS and ADP jobs figures starting in October 2020.

3. State Budgets and Local Government Fiscal Health: The  August 5th WIN dissected this item and noted how the average state has evidenced nearly a 30% decline in revenue YTD due to COVID-19. Alabama and neighboring Mississippi and Georgia have experienced less of an impact with revenue declines of 15% and 16%, respectively. With an impasse in Washington D.C. over future fiscal stimulus, the fiscal burden from COVID-19 shifts to the states and local government. According to a recent analysis of 130 college towns by Situs, college towns may be among the hardest hit. According to Situs, Tuscaloosa could have a $200 million impact on the city’s economy without a full football season. “Total 2019 revenue in the city, which has about 211,000 residents, was $156 million, according to AL.com.” Tuscaloosa lost jobs in the spring as students were sent home and there was no “commencement season.” Its unemployment rate surged from 2.5% in February 2020 to 16.6% in April. Be asking about the impact on CRE value and the ability to transact real estate in a city or county that files Chapter 9 bankruptcy? One such example has already occurred in Fairfield outside Birmingham and as many as 50 college towns face the prospects of Chapter 9 bankruptcy by spring 2021 if the coronavirus remains unabated and there are no NCAA Division I athletic sports.

4. Small Business Failures: In August, Bloomberg published a feature based on data from Yelp and the American Bankruptcy institute titled: "Small Businesses are Dying by the Thousands." Yelp Inc., the online reviewer, has data showing more than 80,000 permanently shuttered from March 1 to July 25, 2020. The American Bankruptcy institute data suggests the numbers are much greater. YTD there have been more than 325,000 business bankruptcies, and Alabama ranks 8th with more than 11,800 - and behind California (#1), Florida, Illinois, Georgia (#4), Ohio, Texas and New York (#7). The economic impact from these small business failures has yet to be calculated in terms of the damage to communities, jobs, lost sales tax revenue, and commercial real estate values.

5. Property Taxes: This is more of an issue in states like California, New York, Illinois and Florida as Alabama has the lowest property tax rates in the country along with Arkansas, New Mexico and Delaware. Collectively these states derive between 17%-19% of their revenue from property taxes. 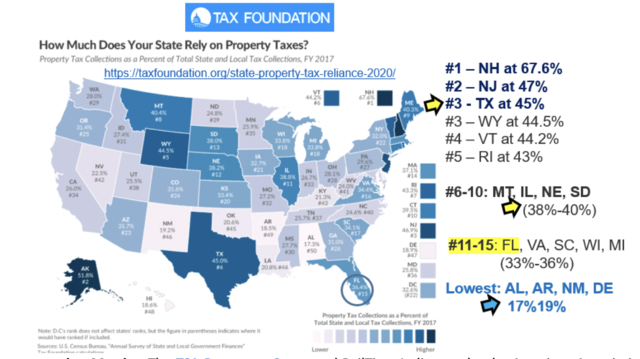 6. Transportation Metrics: The TSA Passenger Count and RailTime Indicators by the American Association of Railroads are the two best forward-looking transportation measures to follow. The TSA index foretells return of normal business and leisure travel. The good news is that the daily count has risen by ten-fold to 800,000 on September 13, 2020, from the April low of 85,000 passengers. The not-so-good news is that the airlines need 7 to 1.9 million daily passengers to break even. In other words, we have a long way to go for recovery of business and leisure travel. The rail traffic is a better story. Traffic in August rebounded to levels at the end of 2019 and suggest activity is normalizing in the supply-chain and at many of our ports. The one exception is the West coast where BNSF and Union Pacific railroads are seeing disruption form a confluence of factors that now include the wildfires. The port of Mobile is a shining star in the Gulf and with Walmart container activity set to rival the port of Charleston by 2023.

7. CRE Debt Pie: The banking and CRE property type issues will be in those capital sources and property types experiencing the most distress form COVID-19. We entered 2019 with the banks having another CRE concentration problem holding nearly 55% of the $4.3 trillion dollars of CRE debt. That remains with a 51% ratio and the banks have yet to really address the market value impacts on MF from rent forbearance and hotel assets from payment deferral programs. CRE-concentrated face challenges in Q4 2020 and 1H 2021 when support programs like rent forbearance and payment deferral programs end. Below is a graphic of the various debt sources share of CRE debt and a breakout for the life companies in the breakout pie chart to the right. The good news for life companies is they have relatively small exposure to hotels. The bad news is they have substantial exposure to large retail (like malls and Big-Box anchored retail) and urban office that will face challenges going forward form remote and “Zoom-work.” Know your lender exposure to CRE and plan for life company and institutional debt to increase exposures in 2021 to Industrial and MF while contracting office and retail. One recent example of this is a end of Q1 debt transaction between NY Life and Idi Gazeley.

Next week’s WIN will reveal the Seven Primary Issues to Monitor heading into Q4.  They will include: i) Appraisal Challenges during a period of “Material Change;” ii) Property Tax appeals in 2021; iii) MF and Rent Forbearance when it ends; iv) Office Outlook in an era of Zoom-Work; v) Retail Bankruptcies and Store Closings update; vi) Hotel CRE with occupancy restrictions into 2021; vii) The Industrial Box and Logistics 2.0.

California Has 10% of the Nation’s Opportunity Zones

Who Should Invest in a Qualified Opportunity Zone Fund?

Birmingham ranks among most affordable places to buy a home in the U.S.

Commercial Lease Considerations in the Wake of Hurricane Laura

Conversion of retail space to logistics use ‘will be small’ – Prologis 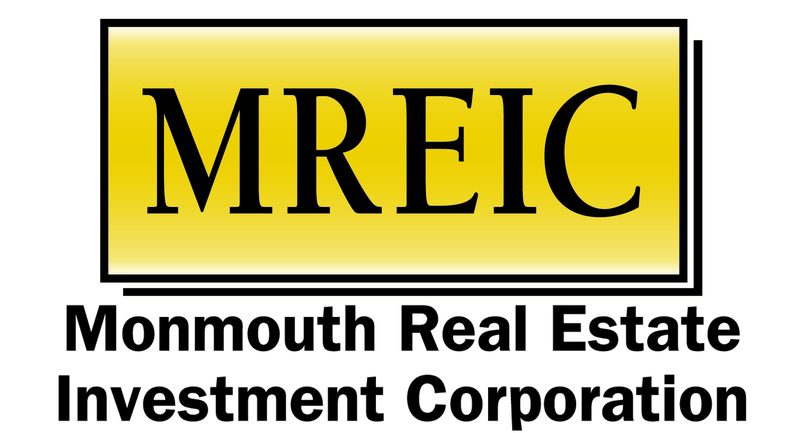