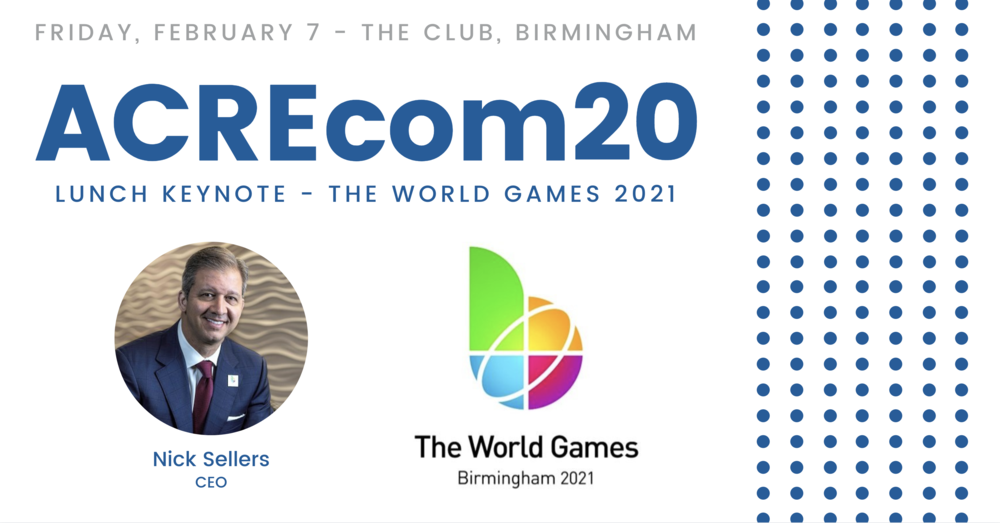 The World Games 2021 Chief Executive Officer, Nick Sellers, is the featured lunch keynote at ACREcom20, “Building the Future.” Next summer, The World Games return to the States where it is expected to have an economic impact of over $250 million on the city of Birmingham.

The World Games is an international sports event that follows the Summer Olympic Games every four years. The Games are staged over 11 days where 3,600 of the world’s best athletes convene in one city, generating worldwide exposure on a highly visible stage. The World Games 2021 will be in Birmingham, Alabama next July, generating an estimated economic impact of $256 million for the city. Next year marks the 40th anniversary of The World Games and the first time hosted by the United States since the 1981 inaugural World Games in California.

Sellers was recently named The World Games 2021 CEO in December. He has several years of leadership experience from his time at Alabama Power and Southern Company where he held several senior vice president positions. He is currently the chairman of the Alabama Sports Council, Bryant Jordan Scholarship Foundation, the Mobile Industrial Development Board and the Mobile Area Chamber of Commerce and Innovation Portal. He holds an undergraduate degree from the University of Pacific in Stockton, California and a juris doctorate from the Birmingham School of Law.

Hear more about the impacts the 2021 World Games will have on Birmingham, Alabama during Sellers’ keynote speech at ACREcom20.