Like Real Estate, it’s all local when it comes to State Budgets

At the onset of the coronavirus outbreak, and prior to state and local shelter-in-place orders in early March 2020, the PEW Charitable Trusts published a report regarding the fiscal health of states and the balances in their “rainy day” and unemployment insurance funds.  The report was titled “States’ Financial Reserves Hit Record Highs;” and the key finding was:

“A decade after the Great Recession, states collectively have amassed their largest fiscal cushion in at least two decades. As most states closed out their 2019 budget year, a surge in tax collections drove the total held in savings and leftover budget dollars to a record high.”

ACRE highlighted this study in an April 1, 2020, WIN titled “The Hip Bone is Connected to the Leg Bone” highlighting that states were in decent fiscal shape at the onset of the coronavirus. Alabama, for example, had a “rainy day” fund reserves equivalent to 35 days of operations with no incoming revenues. That was better than the national average of 28 days, and it was second best among Southeastern states (Georgia was the best with 37 days, and Florida worst with just 16 days). Illinois and Pennsylvania were in the worst situation nationally with essentially zero days of reserves. Now fast forward five months into COVID-19, billions in lost revenues from sales and occupancy taxes due to occupancy restrictions on businesses, coupled with minimal fiscal help for states and cities with less than 500,000 population from either the CARES Bill or the Federal Reserve, and states and cities face a fiscal crisis. 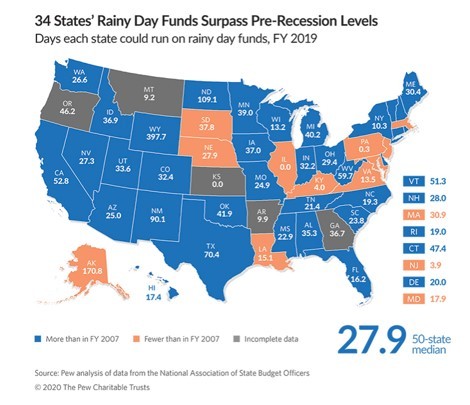 A July 2020 refreshed view on state fiscal health from the Tax Policy Center for the Urban Institute and Brookings Institution - as Congress remains at an impasse on another stimulus/rescue bill to continue unemployment benefits and provide fiscal aid to states - reveals the fiscal situation for states since March 2020 has made a 180-degree turn for the worse. The key findings from this new study on state fiscal health are as follows: 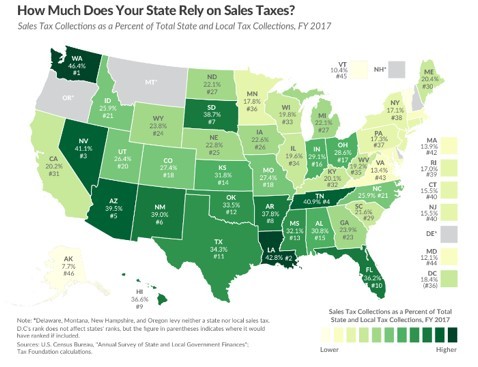 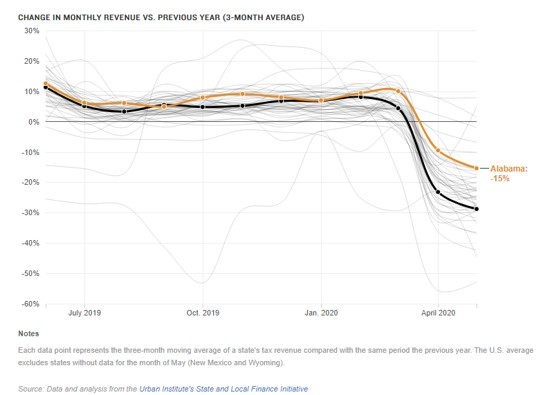 What does the fiscal situation look like in Alabama? According to this new state fiscal health study by the Tax Policy Center for the Urban Institute, “Alabama’s budget is on stronger footing than other states.” Revenue collections are down just 15% in the last 3-months compared to nearly double that as a national average (-29%). Why? Although Alabama saw unemployment rise above 10% levels in the spring, it has fallen back below 10% as auto plants have all reopened - and the now technology concentric economies in Birmingham and Huntsville have functioned well in a work-remote environment.

Increased tax collections pre-COVID-19 from sources like the Rebuild Alabama Act last year that raised the gasoline tax for the first time in a quarter century, and a jump in online sales tax revenue, have made up for decreases in other taxes like sales and hotel occupancy. That’s the good news.

The not-so-good news is that the picture for Alabama's education budget will not come into focus until later this summer after revenue collections are known due to the tax filing deadline being extended from April 15 to July 15, 2020. Personal income taxes are a major source of funds for Alabama schools. Alabama could also feel additional budget pressure beyond schools from Medicaid, more unemployment benefits, and increased staffing under the federal court order regarding Alabama’s overcrowded prisons. Coronavirus cases in the state are rising and now rank Alabama 17th for COVID-19 cases with 94,000 – just behind South Carolina with 95,000 cases and Tennessee with 112,000 cases. Increased COVID-19 cases, combined with prolonged unemployment, will increase costs to Medicaid. Alabama is not out of the woods regarding budget cuts, but the state is in much better shape than its peer states in the Southeast.

Maybe this perspective on state fiscal conditions will assist in understanding the debate in Congress currently over the next fiscal stimulus/rescue bill. Our country faces an unprecedented wave of Chapter 9 bankruptcy filings by cities if some sort of fiscal aid is not extended to states and local government – and I am not talking about bailing out fiscally mismanaged retirement systems. Maybe the Federal Reserve could shift some of its corporate bond purchases of the likes of Berkshire Hathaway, Apple, Walmart, etc., and consider purchases of state and municipal bond debt for infrastructure, utilities and airports. Approximately 138 college towns that play NCAA Division 1 athletics are facing extreme fiscal situations.  Alabama has a few college towns that face fiscal challenges in 2H2020.

ACRE remains committed to its COVID-19 coverage at exploreACRE.com to bring you the insights needed to Look Up & Forward and do the necessary “what if” thinking.

Why 2020 is Primed For Opportunity Zone Investments

How to Navigate the Coronavirus Real Estate Market