Editor's Note: This is KC Conway's last WIN commentary for ACRE as he is leaving the Center to concentrate on his consulting business. ACRE appreciates all of KC's contributions over the last three years and wishes him luck in his new venture! He can be contacted at kcmaicre@gmail.com. ACRE will continue our weekly insights in an exciting new format in the near future. Stay tuned!

A Fed Lesson and Warning

Current Federal Reserve Chairman Powell was appointed by Donald Trump and confirmed by the Senate in February 2018 for a four-year term. He is the ultimate Washington D.C. and Wall Street insider having even been born in the District, educated in D.C. at Georgetown University, and practiced as a Wall Street Investment Banker from 1984 to 1990. Despite that Washington insider training, by June 2019 Trump was threatening to remove him for failing to cut rates fast enough. Had it not been for COVID-19 and the Fed rapidly cutting interest rates to near zero this past spring, Powell might not still be chairman today.

Unfortunately, many in our industry don’t know enough about the Federal Reserve, its history, and how our Central Bank functions to appreciate the double-edged sword it represents to virtually every aspect of our life.  Not only does the Fed set short-term interest rates that influence consumer spending, auto purchases, housing activity, etc., it determines asset prices (by picking the winners and losers in our COVID-19 impacted economy through what it opts to buy and put on its balance sheet), and regulates the banks that influence lending activity.  Believe it or not the Fed has been buying Berkshire Hathaway, Apple, Walmart, etc., corporate bonds thinking they needed support during COVID-19.  Really? All this while not buying or supporting the municipal bond debt of cities with less than 500,000 in population. New York City got support for its water, transit, etc. bonds, but none to a city in Alabama. None to the first city to file for Chapter 9 bankruptcy during COVID (Fairfield, Alabama, outside Birmingham).  None for our 138 college towns or states that have seen revenues decline an average of 29% March through August 2020 (Source: Tax Foundation). The Federal Reserve is a complex and powerful entity in our economy that requires more attention - and at least one debate question.

A few noteworthy items to know about the Federal Reserve include:

Its Origin: The Federal Reserve as we know it today came into existence through the Federal Reserve Act of 1913. Many are not aware that this was the third attempt at the United States having a Central Bank. The first two failed:

The Federal Reserve System Today – Where and Why: The Federal Reserve Bank System (FRB) as we know it today was created on December 23, 1913, when President Woodrow Wilson signed the Federal Reserve Act into law after an interesting “hunting trip” to Jeckyll Island, Georgia, without any public or congressional knowledge or participation led by the most wealthy of the day – JP Morgan, the Rockefellers, National City Bank of New York,, etc. Today, that hunting trip would be a ESG-type event led by the CEOs of Blackrock, JPM, Facebook, Tesla, Amazon and the other FAANG gang. Some things have not’ changed. The FRB system today is composed of a central and allegedly independent governmental agency with its Board of Governors headquartered in Washington, D.C. There are 12 regional Federal Reserve Banks, located in select cities throughout the U.S. that resemble nothing in terms of the influence of industry in today’s economy.  How is the Federal Reserve divided up geographically? Note the following graphic from the FRB 100th anniversary website. 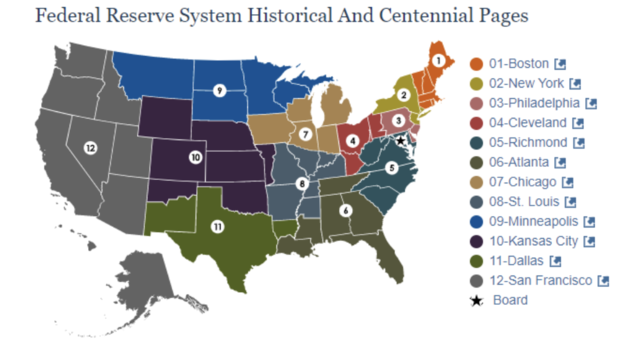 There are many, but the top-3 recommendations include:

1. FOMC 2020 Meeting Calendar – Note there are not 12 monthly meetings and these FOMC dates can and typically impact markets and are when interest rate decisions are made. These move markets and the CRE industry in areas like CRE finance, bank lending through tools like IOER (Interest paid to banks on Excess Reserves) which influence whether banks extend credit or hold it back and clip a coupon from the Fed versus take lending risk. 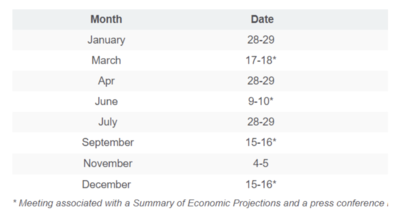 2. Federal Reserve's Monthly Release of Balance Sheet – This is a fascinating monthly release that shows what the Fed is doing with its balance sheet and how it is expanding or contracting. Remember that the Fed does not produce or sell anything. The way it attains resources to grow its balance sheet is by calling the Treasury and asking them to “print currency.” Note the Federal Reserve’s Balance Sheet has grown to over $7.1 trillion from less than $4.0 trillion pre-COVID and beyond the $4.3 trillion peak reached following the 2009-2011 Great Recession. It is important to understand that as the Money Supply (M2) expands/grows, our currency is deflated. It is how a FIAT currency like ours can be damaged/devalued to a point of no return like Germany’s was 1919-1923. FIAT currencies can and do collapse. Read John Lifflander research on this topic. 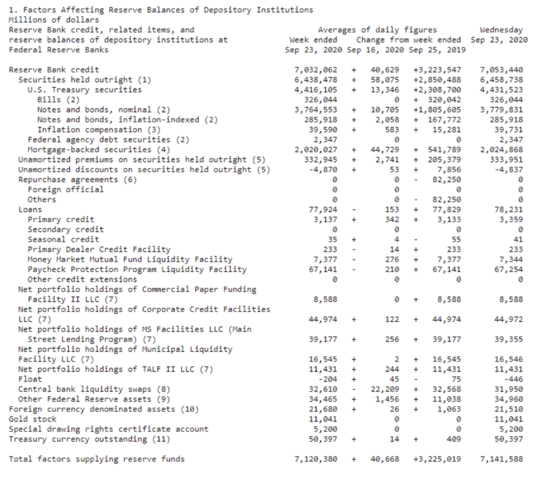 3. Federal Reserve's Beige Book: Formally known as the “Summary of Commentary on Current Economic Conditions,” this report is more commonly referred to as the Beige Book. It is published eight times per year. Each Federal Reserve Bank gathers anecdotal information on current economic conditions in its District through reports from Bank and Branch directors and interviews with key business contacts, economists, market experts, and other sources. The Beige Book summarizes this information by District and sector. An overall summary of the twelve district reports is prepared by a designated Federal Reserve Bank on a rotating basis. This report is where the rubber meets the road and you can go to get real anecdotal information on what is happening uniquely in the states/geography in each Federal District.  What is happening in say the SE is reflected in the Atlanta District Bank comments. The calendar schedule for 2020 releases of the Beige Book is as follows: January 15, March 4, April 15, May 27, July 15, September 2, October 21 and December 2.

In summary, the Federal Reserve may be the most impacting entity on our economy. As a result, we need to have a continuing conversation on what the Federal Reserve is doing and who will lead it next in 2022. The FRB is arguably the most complex and least transparent entity in all of U.S. government – including the Supreme Court.

MIG Continues to Seek out OZ Investments in Key Markets

From hydrogen fuel-cells to giant airbags, construction and roadworks are changing

Fed’s Kashkari warns that delaying stimulus will have ‘enormous consequences’

The Murky Waters of the CCPA’s Private Right of Action: Real and Perceived Ambiguities? Complicating Litigation?

Should the Emergency Suspension of Hours-of-Service Rules be Extended?

US Trade Deficit Widened in August to Largest Since 2006

Moratorium on COVID-Related Residential Evictions Extended Through End of 2020

Home Prices Up 14%, But Price Growth May Wane Soon

Allen: The New Boomtown of Texas

An Essential Place For Business 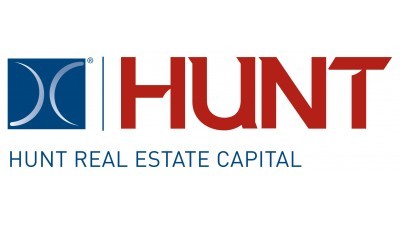